The situation with Kolya Sipunov, whom Liza Glinka helped bring out of the Donbass prior to her death remains complex. The most important thing is that the boy had a surgery in Moscow, was transferred to another hospital, and is now in rehab.
It’s a complex situation, but most importantly, he’s alive and his chances are good.
However, his thieving mother managed to live up to her reputation again, as was expected.
I haven’t been able to visit Kolya myself for a long time, and not because I don’t want to see his mother Katya who robbed me and nearly brought about her son’s death.

END_OF_DOCUMENT_TOKEN_TO_BE_REPLACED

Valeria gave a preterm birth to her son right after she fled Lugansk during the shelling in 2014. Artyom was born after six months–born without sight. It was not immediately noticed. Valeria had nowhere to live, she was ultimately taken in by strangers. They were lucky to have fled. Because there was incoming into their house, and more than once. “Incoming”–this is how shells that score hits are referred to on the Donbass. All the windows were shattered, the roof was blown off. Valeria only took documents as she was fleeing.
Our guys met her during the distribution of New Year’s presents at the Lugansk Welfare Center. Lena and the Center workers, dressed in costumes, went house to house with greetings for the kids who couldn’t come to the party… 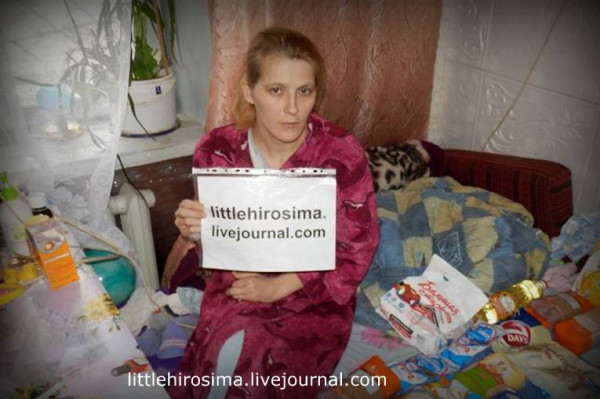 END_OF_DOCUMENT_TOKEN_TO_BE_REPLACED

Not every man is a defender. The presence of testicles does not bestow this quality on everyone.
I’m often near the Partizanskaya metro station. The monument to partisans stands there.
There is a grandfather, next to him a youth and a woman.
One can stand without end.
Here’s a grandfather, a grandson next to him. Or no, perhaps not–not a grandson, they met later. Rather the boy’s parents were shot back in 1941. While he was watching, hiding in the garden. Then there’s a woman. Straight-backed, resting on a submachine-gun. Her husband was most likely hanged. She’s not young, all of her children were probably killed…
And he, with a beard, stands and raises his hand.
I can’t convey how much pain is contained in that monument.
I don’t understand that day. I don’t understand to whom it is dedicated

END_OF_DOCUMENT_TOKEN_TO_BE_REPLACED

Remember these two sisters from Lugansk?
We visited them in December.
Marina is the de-facto mother of her sister. Works as a cashier in a supermarket, supporting them both. She’s 21, and she’s responsible for her 13 year old sister while their mother lives somewhere else with someone else.
It’s not possible to deprive the mother of parental rights so that she wouldn’t keep drawing the child benefit–civil courts don’t operate in LPR. Therefore only the mother can keep getting the money, even though she rarely remembers they exist.
–And she shouldn’t remember we exist.
So says the older one. END_OF_DOCUMENT_TOKEN_TO_BE_REPLACED

Lena is not a young woman. She has five kids. We have written a lot about poor families with many children, but often they have problems that are not related to war. But in this instance…
Lena’s husband and the father of the kids is gone.
He was not blown up by a shell, was not shredded by shrapnel. Did not suffer from cancer or heart attack, which now are endemic there.
He simply couldn’t take it…
And… 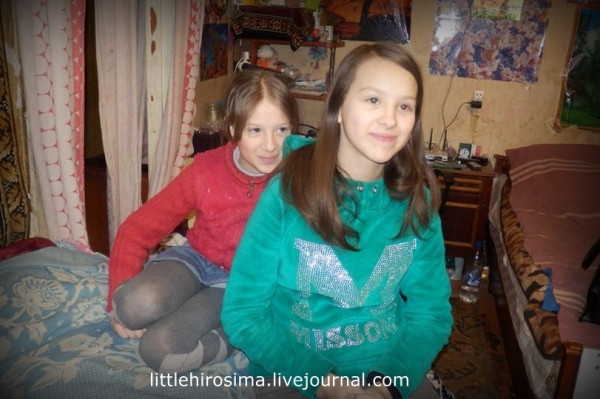 END_OF_DOCUMENT_TOKEN_TO_BE_REPLACED

A sensation at RIA: “German actress and singer of Hungarian extraction Marika Rekk turned out to be a Soviet intelligence agent.” One fact concerning my family drew attention in that story.
“The intelligence network included about 35 agents, including bankers, military, civil servants, and also the actress Olga Chekhova.”
In actuality, there were many discussions concerning the participation of Olga Chekhova–a famous actress and Hitler’s favorite, a nephew of Olga Knipper-Chekhova (the wife of the great writer)–in Soviet intelligence operations. There were TV shows, movies, books. But no actual documents confirming these stories. Sudoplatov’s famous book about Olga as intelligence agent had no references to actual documents. I was even contacted by intelligence historians in order to confirm these stories. Specialists thought this was simply a beautiful legend and fairy tale, pleasing the public and spread by the media.
The “actress-agent legend” also mentioned, among others, Olga’s brother, Lev Knipper, a famous Soviet composer, who was supposed to have participated in the mission to kill Hitler. Little is known about his role. But it is known that he went to Germany more than once to visit his sister, to deliver something, and have some meetings. But I know this only from generally available sources.
That was my grandfather.
END_OF_DOCUMENT_TOKEN_TO_BE_REPLACED

If someone tells you that our people are indifferent, simply send this “someone” the greetings from the hundreds, no, thousands of children, elderly, or simply inhabitants of the Donbass who got food, clothes, household items, medications, from our caring people.
Not only from Russia but from every continent. Irrespective of political views. Many of them have no connection whatsoever to Donbass or Ukraine. For example, Pavel. He lives in Austria. Since the beginning of the war, he’s been regularly helping the Donbass through various foundations. I know him only through a short exchange of messages over the internet. He’s made a second transfer of money earmarked for helping the Lugansk Orphanage.
It currently houses 107 abandoned kids, some of whom are disabled.
Supply situation there greatly improved. While at the war’s start these institutions were in dire shape, right now it’s a different story. 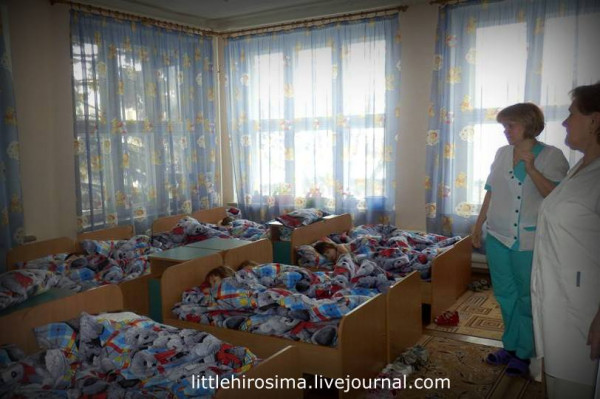 END_OF_DOCUMENT_TOKEN_TO_BE_REPLACED

This is Nina with her mom. Nina works at the Lugansk Assistance Center (LGTs) which we frequenly write about.
This center is visited by people who have no place else to go. Amazing people work there. What’s there to say–I’ve written about them more than once. And I also wrote how many of them, of these “girls”, have seen various cases. They don’t simply support needy families. The list includes people in need of a safety net, single mothers, mothers with many kids, but also drug addicts, alcoholics, or simply people for whom nothing is sacred anymore. Who attack and rob people who help them…I’ve met such people myself.
Nina is an inspector, and a very pleasant and modest woman. Every time we see each other, she wants to hug me but manages to refrain. He’s sincerely happy for the people who are under her care. It’s not just work for her, but rather a mission to help.
Zhenya recently came to the center and saw Nina in tears. She didn’t say anything, but he learned from the other “girls” that her mother at home has major problems. Girls. Zhenya always calls them girls. And so do we.
About two weeks ago Nina’s mom fell into a coma and was barely brought out of it. Mom has sugar diabetes, shingles, and hypertension. She’s had a heart attack. Zhenya learned she has no glucose meter and that Nina spends more than half her salary on medications. 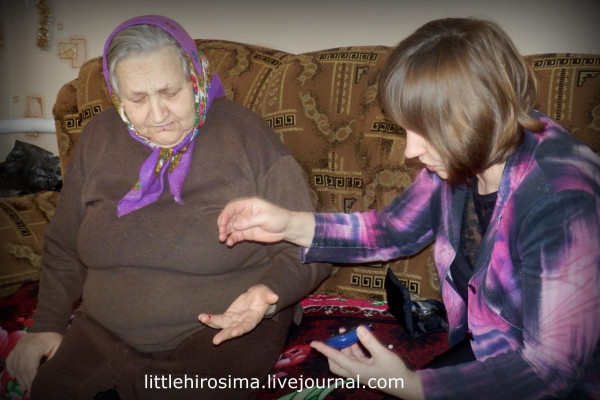 END_OF_DOCUMENT_TOKEN_TO_BE_REPLACED

We’re awesome!!!
The post about Lyosha from Lugansk, who passed out due to malnutrition, blew up this blog.
I got responses from many people wishing to help.
But apotheosis came in the form of a short letter from Katya: “Dunya, can you meet me tomorrow? I’ll donate my computer.”
At the metro, I was awaited by a tiny and pretty young girl who gave me a new computer, mouse, and headphones, all bought specifically for Lyosha. She came with them over the metro on a wintery Saturday morning, when everyone is at home asleep or resting.
–Used ones are worthless. They instantly break down.
She also brought some books about Donbass.
It turned out that she’s been long helping people on the Donbass, including wounded fighters, and couldn’t ignore Lyosha’s story.
We stood by the metro and talked and talked. And I almost began to cry… 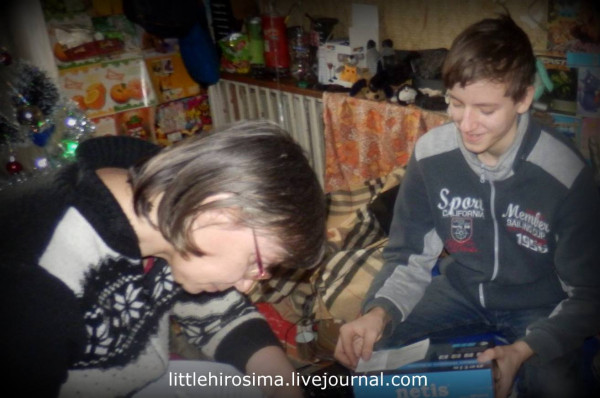 END_OF_DOCUMENT_TOKEN_TO_BE_REPLACED

Marina Anatolyevna seems like a young girl. We met her during the summer. At the time she was already in charge of the Novosvetlovka hospital hospice for six months. Bangs, thin arms, and eyes full of wonder.
In 2014, Novosvetlovka was just about wiped off the face of the Earth. But it wasn’t. It withstood the assault. Although its hospital was badly damaged, just like most of the homes, which became ruins. Some of the wards were closed altogether, including the maternity one. Many sat through the bombings in the hospital’s basement.
After a while, the hospital was renovated and new wards were op;ened.
Unfortunately, maternity was not one fo them.
Now it houses a hospice. It’s small–right now there are 25 people there. They put in charge a young doctor, Marina Anatolyevna Astakhova.
When I visited it during the summer, instead of this blue plate there was simply a piece of paper with typed letters. 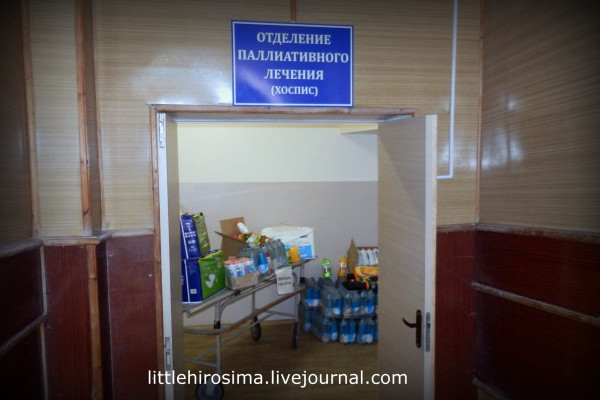