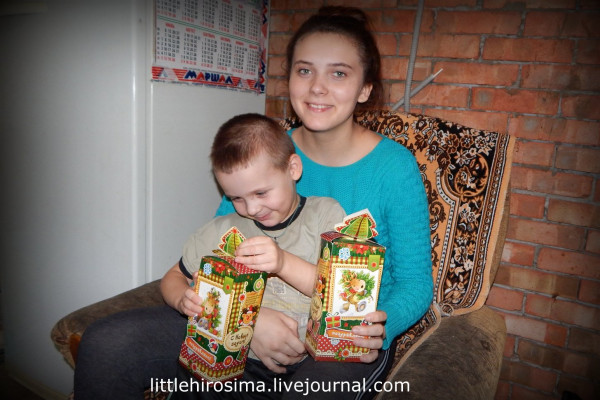 I sometimes ignore some details, it’s hard to repeat them post after post. That’s why Irina gets it all at once.
Ira’s home is in Vergunka, which is that part of Lugansk that’s close to Ukrainian positions. Half the village was destroyed by rocket artillery. But it’s not as if the other half was unscathed. Half of Irina’s street is in ruins. You’ll see many ruins on the way there. Her home was badly damaged. When all hell broke loose, Ira was pregnant with Vovka. She grabbed her documents, daughter, and ran to Lugansk. Where she gave birth. When she returned, half the house was destroyed and the rest was looted! Everything! I remember her saying that even dish towels were stolen. Where was the husband? He RAN OFF!
They haven’t had contact since. He’s alive and well. I’m often written that, well, I’ve been calling him names but perhaps he’s doing poorly. No, he’s just fine–he’s on social media, he puts “likes” on women’s posts. He’s written his daughter once or twice.
Vergunka has not had normal water supply for years. Electricity was missing for a long time too, they lived by candlelight.
With great effort, we’ve managed to get her roof back up, with the assistance of concerned people and my readers. LPR installed windows. A neighbor, using what was available (clay, cobblestones) restored her wall. 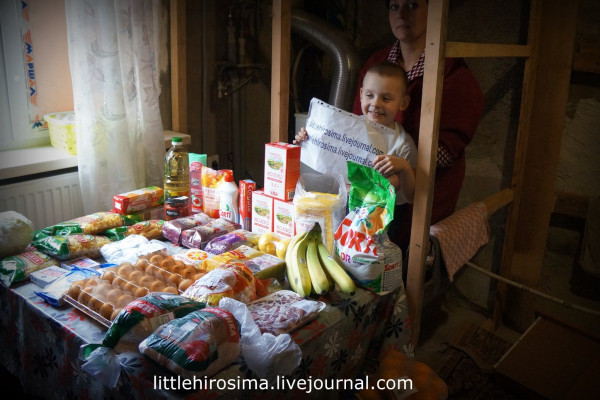 We’ve been constantly helping them for years. Food, repairs, forks, spoons, pots, clothing for the kids, medications. Even a computer for the daughter. Dear Lord, how much garbage I had to read in the comments when I asked for one for Vika–the girl wants to go to medical school). I was told that I and Vika had some nerve to ask for an i-phone. What i-phone? I never found out. I suppose people were just envious. But the main thing is that Ira, Vika, or especially Vovka never asked anything of us or anyone else, ever! It was wholly our idea and initiative. We’re trying to help this family survive! 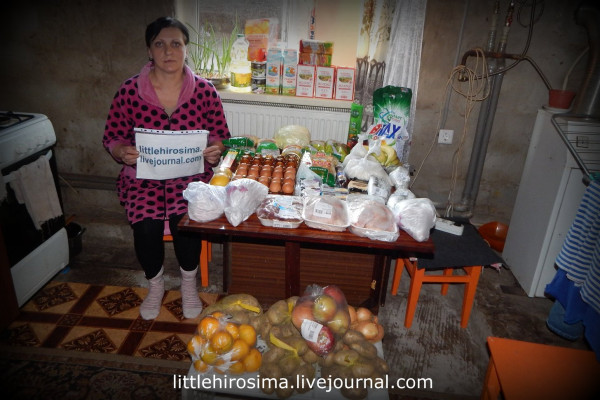 They’ve lived in a home all these years that has been partly destroyed. While walls have been patched up, they are still bare, without stucco.
Our amazing Boris from Kazan made a present for Ira for New Year! He paid for the repair materials (see photo). It was a miracle, and there are no words to describe Ira’s joy. Now they are slowly fixing up the kitchen.
Boris, you are a real human being! Thank you from our entire team and the family!!!
Photos with construction materials are below. Also reports on aid for the last two months. 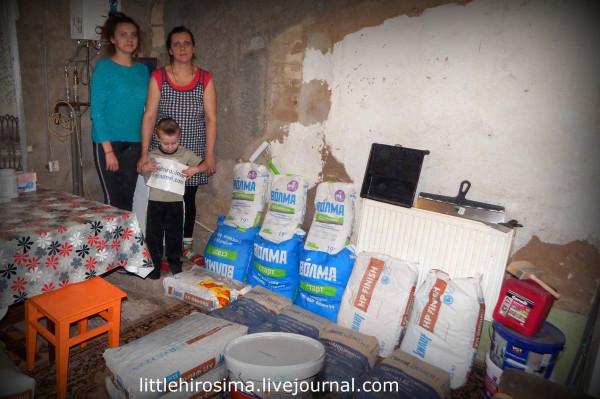 We try to visit the family as often as we can. Last time, Ira really scared us. I’m citing Zhenya:
“Before New Year, she went for a check-up. Some young gynecologist categorically said “You have cancer” (!!!). We come for New Year, and she sits there all grey, glass eyes, only her lips shiver. “I have cancer”. We started asking questions, then convincing her one should not just accept that diagnosis. We had a histology done. For two weeks she was in limbo. In the end–NO CANCER. Oncologist said “yes, it’s clear she had a difficult birth that required surgery, but what dirtball issued you this diagnosis?” (literally)
Ira will have a surgery in February. We’ll need to buy some medications. One can never guess what exactly, it all depends on what the official humanitarian convoys deliver from Russia.
But we know from experience one always must buy something.
The aid is necessary, and we’ll be very grateful if you help Ira. Please label such contributions “Ira”.
Big thanks to all who participate in our aid for this family! It is difficult for Ira to deal with it on her own. 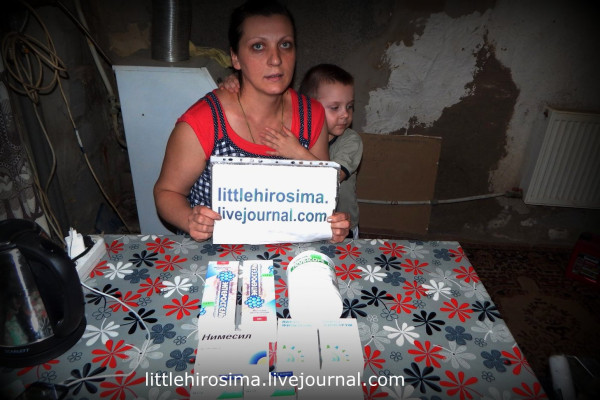 If you want to help this specific family, please label your contributions “Ira”.