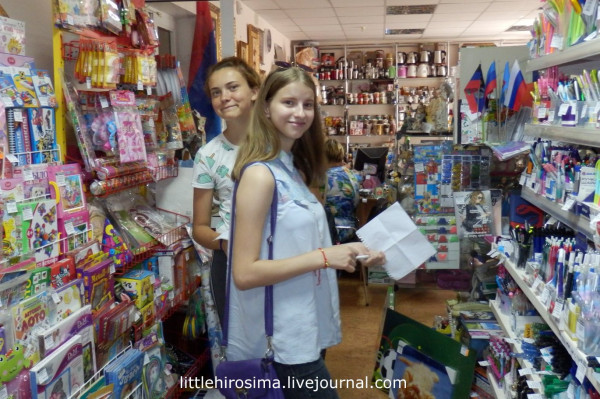 Alyona and her sister Marina live on their own, without parents, in Lugansk. Marina works and feeds Alyona while she studies. They never saw their fathers, and the mother is doing this and that and, in general, leads not the most wholesome of lifestyles.
To read about Alyona and Marina, click on the “sisters” tag at the bottom of this post. 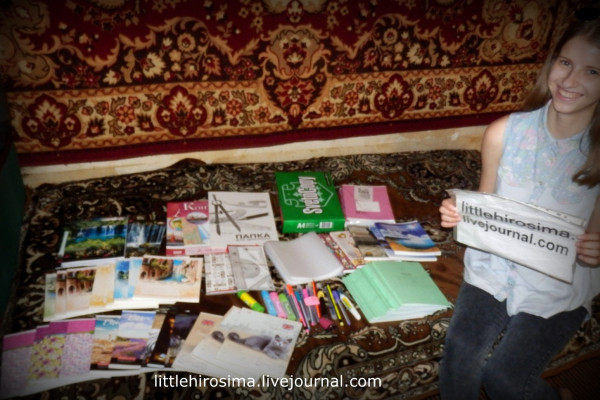 Vika is the daughter of Ira from Vergunka which is right on the front line. She and the pregnant mother were abandoned by the father during the shelling. While they were hiding in the city from the shells, their house was badly damaged. Then looted by marauders. You probably remember them) 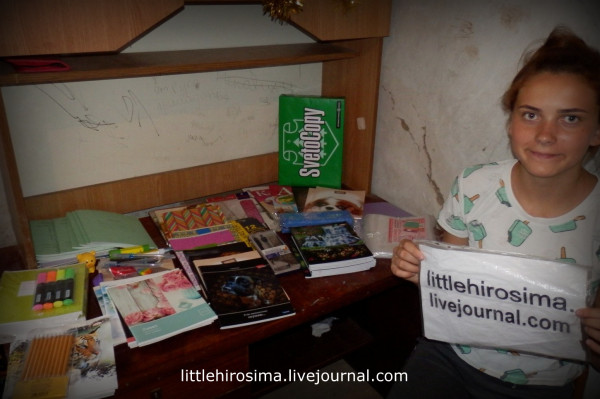 This is Vika’s mom Ira and brother. Look at how Vovka’s grown!!! To read about this family, click on the “Vergunka” tag. 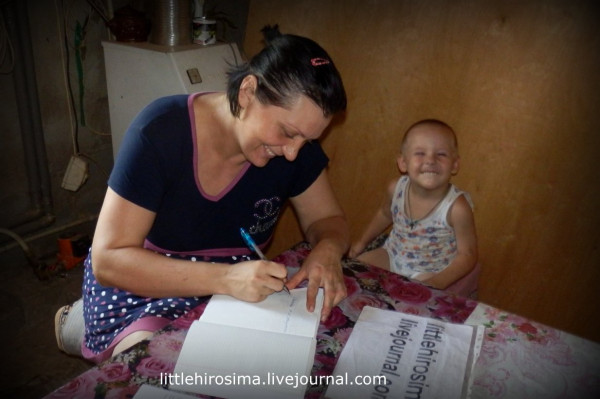 And this is Vladik, the son of Vitaliy and Natasha, “from captivity”, as we refer to them. They are from Rubezhnoye. They live in a dorm in Lugansk and started their lives over from zero. Vitaliy was in captivity, Natasha also had a hard time getting into Lugansk with her son, and you already know about that, I’ve written about them several times.
Natasha: “it’s good that we have you, we do the best we can but can’t afford hardly anything, we’re barely making ends meet.”
To read more about them, click on the “Vitaliy” tag. 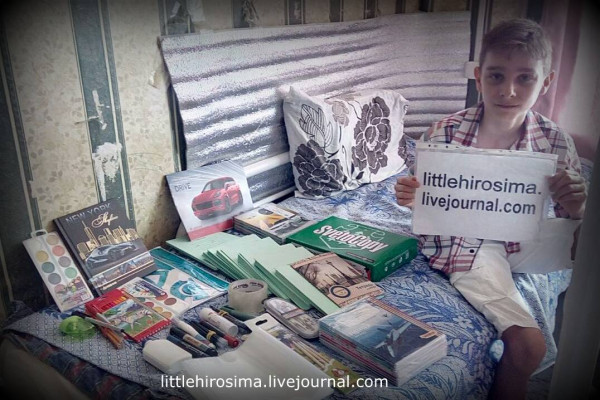 Sasha’s mom was wounded right in front of him. She died two years later. Now he lives in his grandmother, Taisiya Pavlovna. The father vanished and there’s nobody else to help them. They live off the grandmother’s pension.
To read more about them, click on the “Taisiya” tag. 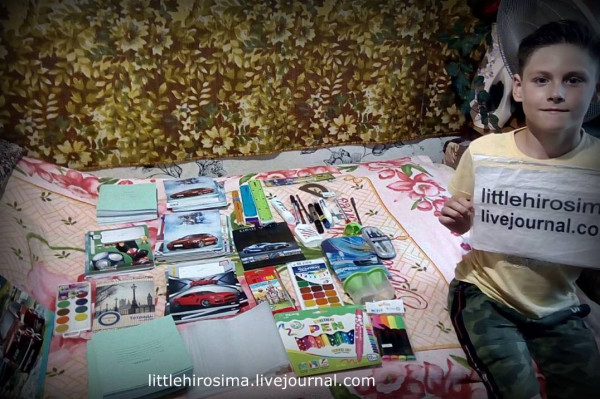 These are the sons of Natasha about whom I’ve written recently. Her husband was in the militia, and was killed. She suffers from epilepsy so she had a skull operation to remove a swelling which came out of nowhere. They are without a home, and rent space from friends. 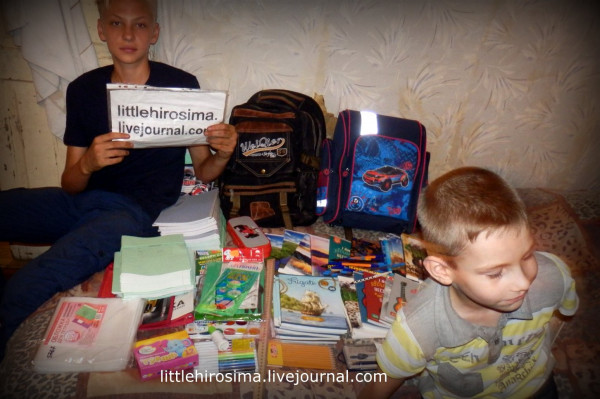 To read more about this family, click on the “Natasha” tag. 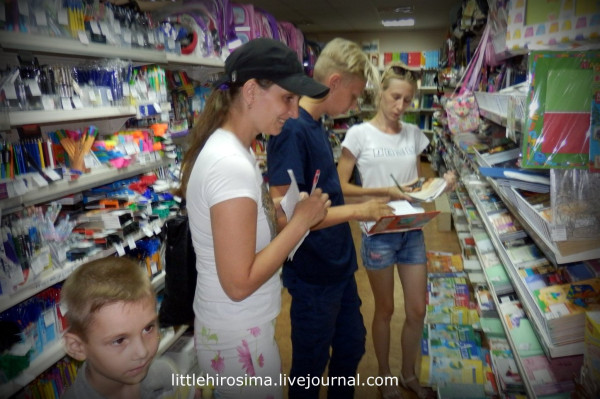 This is Timur, you remember him and his brother Elisey. They live with their disabled grandmother Lyubov Mikhailovna.
Their mother vanished in 2014. Vanished, but can’t be deprived of custody since civil courts in LPR are defunct. Therefore the grandmother can’t get benefits for the grandkids.
To read more about this family, click on the “Timur and Elisey” tag. 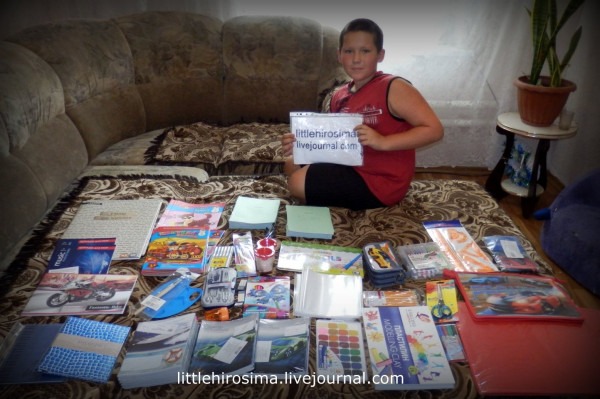 Timur is still at the arts school, so we bought everything that requires. 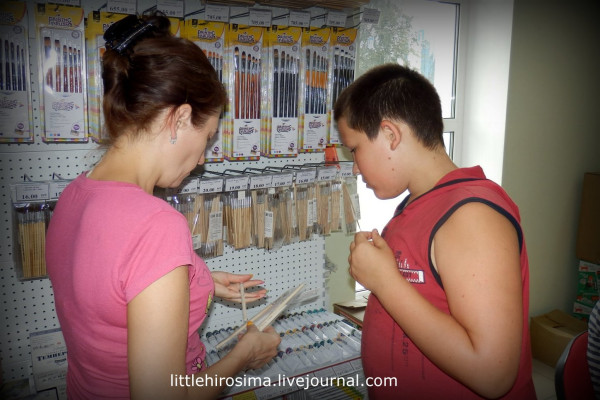 This is Vladislav, Yulya’s son. We helped them several times with food. They live in a communal apartment, have big debts. They are alone, no relatives. She’s an orphan, there’s nobody to help her. 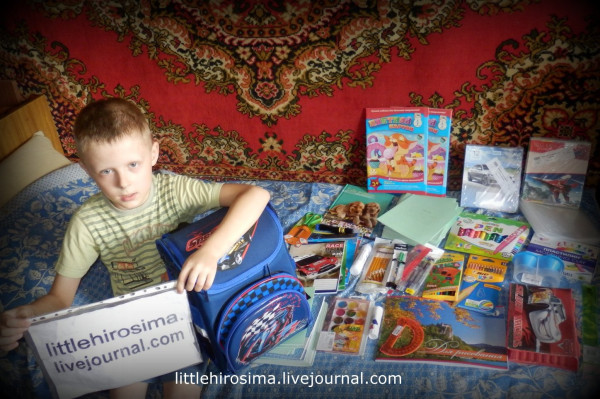 And that’s Sasha. He also lives with his grandmother, the father’s mother. His own mother abandoned him when he was very little. The father was in the militia and perished defending his land.
The medal was given posthumously to Sasha instead.
To read more, click on the “Sasha” tag. 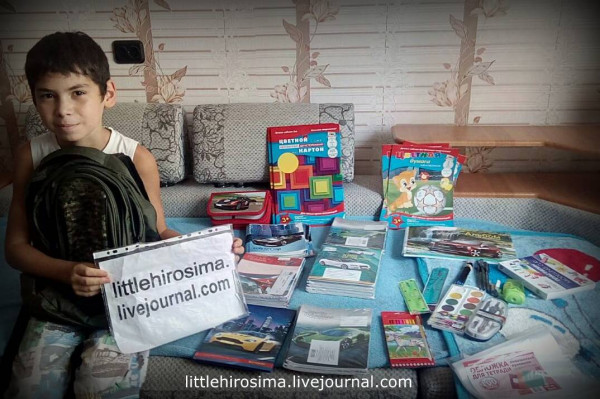 He excelled in the third grade. 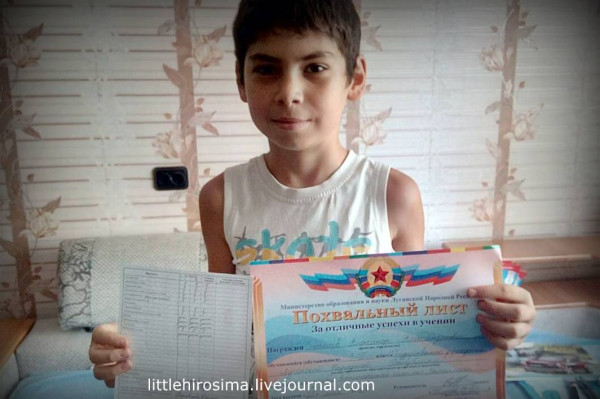 Friends, thank you for your help! And please join our Operation “Back to School”!