Last winter I succumbed–I developed problems which I think are called cancer-phobia. The fear of getting cancer. People say it happens to hospice volunteers. I had panic attacks, I would wake up at night from simple colic and wouldn’t be able to fall asleep again, thinking terrible thoughts. Then I’d frantically pace down the corridor, pinch and prod myself everywhere, and cry. I found it hard to breathe, I inhaled air as if oxygen were shut off. I was shaking, and I was finding symptoms of every disease imaginable. If I had an unexpected bruise, which is normal since I’m active in sports so I don’t always notice being hit, I started to wonder. I couldn’t do normal things–writing, reading, having a conversation. I remember how we got acquainted with Nina in a hospice who had a lump on her hand which then grew and consumed the hand, which was amputated, and then the rest of her. We got acquainted, and several days later she died in pain. This lump remained in my head–an ordinary lump which killed a human being.

But we continue to help. 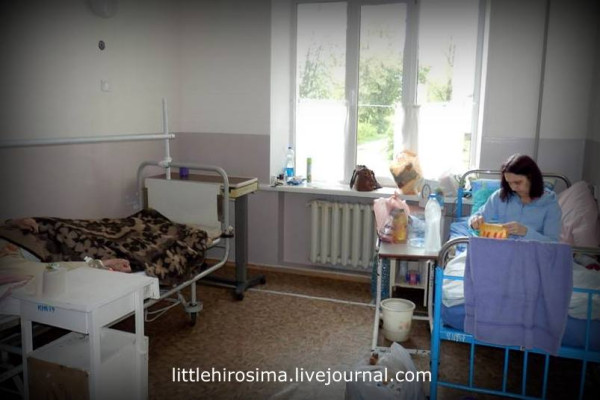 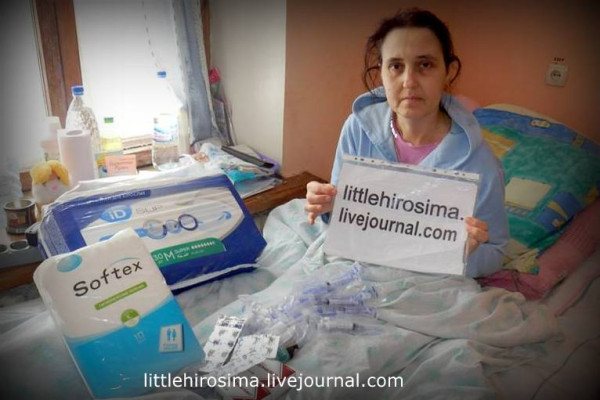 Lilya got cancer right before the war, and instead of getting treatment she was hiding in cellars from shells. Her house was in Lugansk, in the part that was heavily shelled. Lilya lost precious time, she had advanced cancer and the doctors gave her a month to live. But she needed some observation. Moreover, the family could not afford anything. 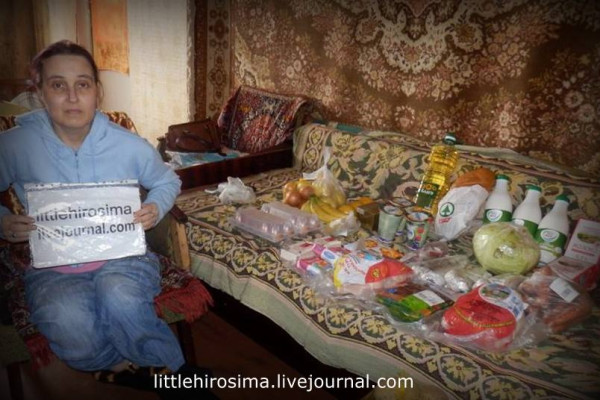 Lilya lives alone with her son, she can’t walk or take care of herself. She requires medications, diapers. There’s nobody to wash them, and one also has to eat and there’s no money for that either. The son is growing, he too needs assistance. He lived through the shelling, now his mother is wasting away. He’s in a rehab center where psychiatrists are working with him, he’s studying, but… 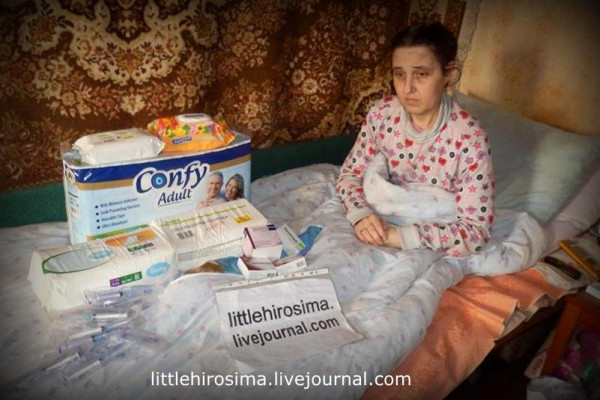 We got Lilya into a cancer hospice and she spent 4 months there, against all rules. Usually people there can stay for up to a month. 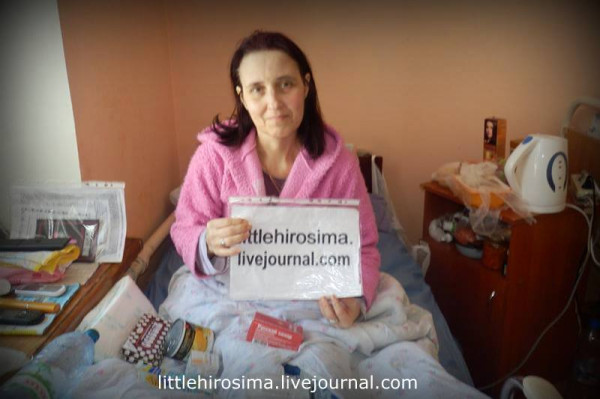 She was sent home, and we talking to a neighbor who was paid to help her, for about a moth and a half. Then she too gave up. “It’s very hard, psychologically, I can’t go on.” I understand her perfectly.
Our friends continually bring Lilya what she needs, all thanks to your help. The photos show our work over the course of several months. 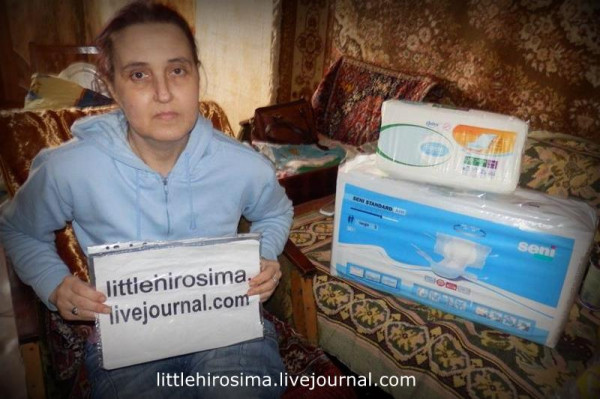 Then we got in touch with a hospice in Novosvetlovka which admitted her. Not a cancer hospice, though, so it doesn’t have the necessary medications. Zhenya writes: “They gave her a nice room, two beds, opposite of the desk. Easy to call the nurse. But…There’s no cell service, no TV service. We’ve tried to set up the antenna for two hourse, no success.”
We’ll try to get her into the Lugansk cancer hospice again, but the odds are against us.
They are heavily overloaded, people are in beds in corridors, there’s a long waiting list. Sometimes people die before being admitted. There’s nothing one can do about that… 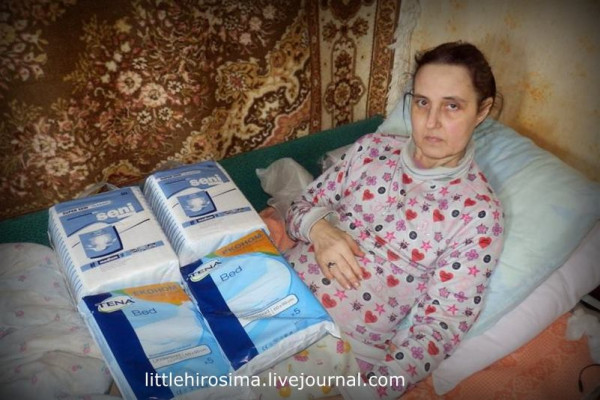 After the move, Lilya’s mood deteriorated. She gained weight in the Lugansk hospice. Last time I saw her, she was in a combative mood, gave orders, told stories, smiled and laughed and all of our jokes.
Zhenya talked to the cancer ward director, wanting to find out what to do ho help. She responded–don’t torture her. Lilya complains her body is “like stone”, crushing her chest and muscles. They asked the director–“is that what we think it is?”. “Undoubtedly–cancer everywhere.” Lilya is fading away. The director asked for a number to call, just in case. But there is no number to call. So Zhenya gave his.
Lilya has nobody else left. 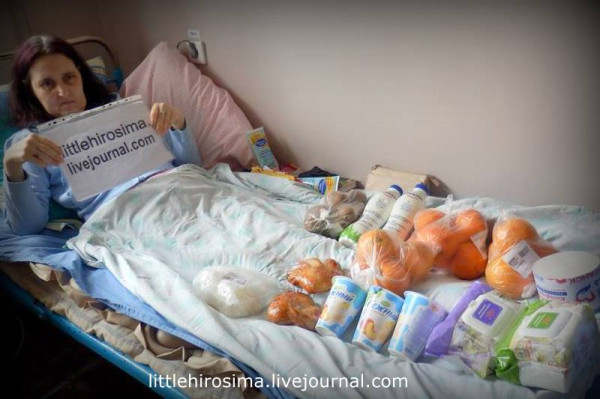 This is Anzhela. We also met her in the hospice. She has female trouble–everything was cut off. She lost a lot of weight and her hemoglobin dropped. We brought her food, medications in order to increase the blood iron level. We also paid for a scan which unfortunately found small formations.
The cancer clinic refused to treat her, due to low weight and poor hemoglobin. But the doctors likely think treatment would be useless. We were called by the daughter, who cried and told us she sold everything she could to pay for the treatment. 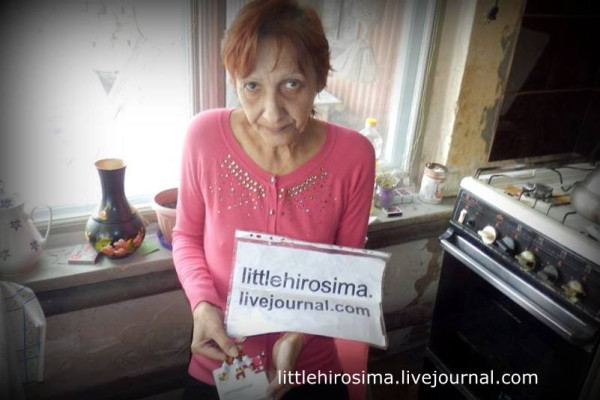 And this is Tanya.
Completely alone, no husband, one young son, no relatives, a tiny pension. Six chemos in a year. There was hope, but not there are metastases in the lymph nodes. Her hand is like a stone–the growths are there too. There’s no point in operating. 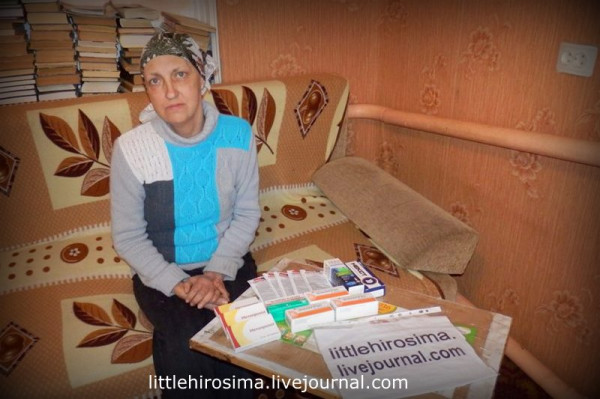 Nobody has told her directly the true state of affairs.
Tanya is awesome. In spite of everything, she’s not surrendering, she’s fighting and hoping.
She planted dill in her garden.
Tries to not even think about her illness. 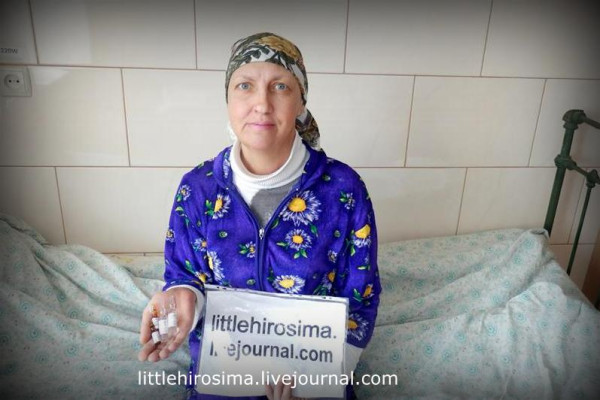 I would like to say one more thing, perhaps a banal one, perhaps for one hundredth time, but–live your life to the fullest. Don’t think up problems. Life is so short, and anything can happen at any moment. We spend so much energy on unnecessary emotions. We simply understand what genuine suffering is. I say “we”, because it also concerns me.

Big, no, huge thanks and a low bow from all of us to those who participate in our aid effort, who continue to read me, and who reads these posts to the end. I don’t know if I would be able to read something like this. It’s not simply difficult, it knocks your feet from under you. Such pain.
Please label contributions specifically intended for “our girls”, as Zhenya calls them, “Cancer”. But I want to say that even if nobody contributes anything, we won’t abandon them.