The village of Molodezhnoye is on the very border. One can’t call it a “grey zone”, strictly speaking, but it is a dead zone without shops or any other life. This is the very border. There is fighting, shells come from this and that side. Fields along this entire road between the last Pervomaysk checkpoint and toward this tiny village are littered with collapsed power transmission towers.
When we entered the village which consists of several streets, we found ourselves in complete silence.
It was the end of March, LPR was under a blanket of snow. I sat in the back seat and, as usual, photographed everything. We stopped opposite of a small destroyed building with a few gaping holes made by shells. I for some reason lowered the window and took a couple of photos. I can’t say I saw something unusual. An ordinary building, one of thousands bombed-out buildings on the Donbass. The camera clicked, when Lena suddenly tugged at me:
–Did you photograph them?
–Whom?
–See?
And she was pointing at the corner of the house, where a man with an assault rifle stood. At that moment he started to wave his hand and walk in our direction. Then he hastened his pace and started to run. As he was running, several other armed men came out of the building and came toward us. We were driving in two vehicles, and ours was the second of the two. The local guys accompanying us were in the first vehicle and didn’t see what happened behind us. They got stuck and almost immediately got out of the car go to toward the multi-story buildings in order to ask where to go. When a militiaman ran up to our car, the locals have already gone and it was just us, in a foreign car with Moscow plates.
A man walked up to the glass behind which I sat and demanded my camera with cracking voice.
–What are you doing here? Why did you take photos? Give me the camera!
He was dropping questions one after another, and his voice was shaking. I extended the camera toward him and started showing him the photos, telling him I didn’t take photos of anything, just of the building. That I didn’t see him, that I didn’t know him. I was trying to awkwardly excuse myself, and was in shock myself due to the whole situation. He started to tear the camera away from me.
–Give it to me.
Then I chickened out and instinctively started to pull the camera toward me. The strap was wrapped around my hand, so it was difficult to tear it away. Just then another crowd of people ran up.
–I won’t give it into your hands.
Everyone tensed up, and a problem appeared. I was at that point ready for the Earth to swallow me up–why did I even roll down the window. And how could one trip oneself up like that?
The guy in charge also started demanding the camera, and then I started to smile and to show them all the photos while still holding the camera, and tell them how we came to help one family with children who have nobody else to help them, and that we’re basically idiots and don’t understand anything, so I’ll erase everything. And I started to erase right in front of him.
–Please forgive us our foolishness. We came here like idiots, don’t understand what’s going on. See, I’m erasing.
I erased all the photos, only the towers remained.
The guy in charge calmed down but continued to curse. Though it was just grumbling at this point.
–One shouldn’t photograph anything here.
–Please forgive me.
I was terribly upset, but tried to do everything to make my foolishness look charming. A few more seconds, and our guys would come out, and then the whole situation would be on the edge. I was wrong, the whole situation made me feel very uncomfortable in front of everyone else. I felt like a brainless Moscow hen. The militia left, and right then Ruslan and Yura returned, bringing a local guy who took us to Anya’s family, for whose sake we came to Molodezhnoye.
The local was a very pleasant man in large rubber boots, and he was happy to go with our whole group.
–You won’t be able to drive there. It’s all piled up over there, nobody clears snow there until the spring, only on foot.
But after that encounter with the militia for some reason I got very afraid. We went using some back trails over snow. There was not a soul around, only snow, snow, and abandoned homes. I started to think that there were mines all around, and we were about to die. You know, such stupid feelings, completely irrational and defying explanation. In some spots along our route our guide would say:
–Give me your hand, otherwise you’ll fall. So we came to Anya’s. A big house, where we met by a chatty little Masha, with braided hair.
–Olya’s asleep, I’m older, I’m four, and I don’t have to sleep.
–How old is Olya?
–Three.
I gave the girl some toys, I look to the right–a kitchen, and everything is papered up with newspaper.
–Something hit?
The girls’ granny stood next to them.
–It hit here in February ’15, everything is now boarded up with plywood, all the glass fell out. Not too bad, but Anya’s house was destroyed completely in the fall of ’14. Direct hit. Here Anya, a beautiful young girl of my height (that is to say, no great height at all) started to speak. A tiny and smiley girl. She seemed totally out of place in this house, where we had to walk on foot by trails.
–We didn’t live here then, I left with the kids. Not the whole house was destroyed, only half. But one can’t live here. Husband and I bought it before the war. It’s here, on the same street. We didn’t manage to get it fixed up.
–And where’s your husband?
When we drove to Anya’s, we didn’t know much about the family. We were told “two kids and a difficult situation.”
–Husband died on the front line. That autumn. Should I show you our house? It’s nearby, down the street. 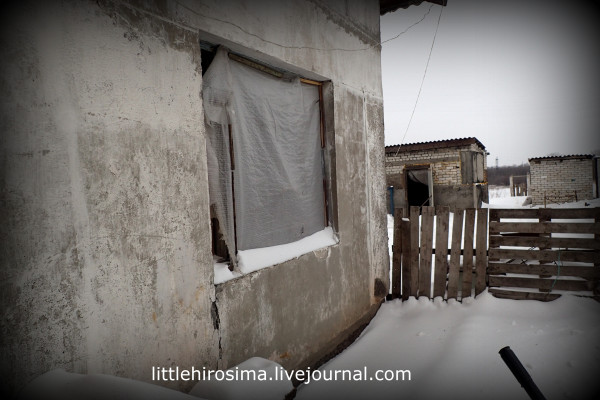 But we didn’t go to their house. We didn’t stay long at all. We started to feel awkward.
And we were quiet the whole way back to Pervomaysk. I kept thinking about Anya who, it seems, is younger than me. And about the chatty Masha. And “little” Olya who was sleeping.
I kept trying to imagine–how do they go out to play? Where?
Not in the forest, not in the fields. Nowhere.
Her husband died on the front, close to his home, defending his home, which he was deprived of.
Anya probably has nowhere else to go, she’s living with her daughters and mom in such a situation.
But where could they go with such little kids if they don’t have relatives or friends who could help in a new place? Right now there is nothing suitable for refugees.
All of these thoughts were swirling in my head on the way back, like the snow-swept lanes.
And the damned photos were mixed up in this too.
My foolish deed, which was totally from another life.
A life which does not intersect the lives of these people. 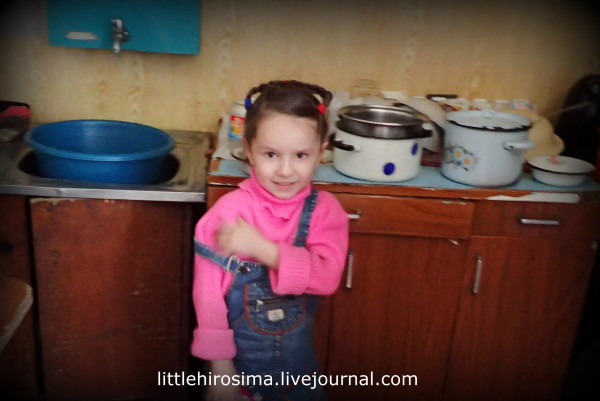 Our humanitarian aid. Thanks to all who participate!