As of late, one can detect contempt toward our emigrants emanating from among the patriotic community. “Traitors”, “don’t let the door hit you on the way out.” I don’t find it pleasant to read, and I want to not only defend our people abroad but say that many of them are bigger patriots than people who put “Thank you Grandfather for the Victory” stickers on their cars, but at the same time behave rudely and don’t let pedestrians cross the road.
I’ve encountered that directly. I’m not talking about the rude individuals but Russian patriots in other countries.
There are many of them among my readers. And!
Many of them continually help the Donbass.
The majority of funds for the aid effort is coming from them, the inhabitants of Canada, USA, Australia, Germany, England, Austria, Norway, etc.
During these years, I’ve found lots of groups on facebook, LiveJournal, VK, where people cooperate, assemble truckloads of aid, and send it to the Donbass.
One can hardly imagine what it takes–organizing logistics into the unrecognized republics from abroad! It’s extremely complex, I know what I’m talking aobut.
They do it themselves, through foundations, through volunteers such as myself. And if you think they are former inhabitants of Lugansk and Donetsk regions, you are mistaken.
Many of them are from families which have never visited these places. And I am once again happy to witness all this and to be able to help.
Here I would like to tell about the St. Nicholas Church in Vienna.
The people of this church, from the very first days of the war, through a variety of volunteer organizations, have been continuously helping the Donbass, its hospitals, retirement homes, and hospices in LPR and DPR. They organized charity fairs and concerts in Vienna, in order to attract attention to the problem of genocide on the Donbass.
I have written about them many times, they send a walker for the little Veronika from Pervomaysk, we also used their money to buy food and diapers for the baby ward in Lugansk.
I recently got a reply from Pavel who asked to deliver disposable diapers for the retirement home in Lugansk on Shcherbakov St. and for the Novosvetlovka hospice which opened during the war.
It’s like that.
So we bought and delivered diapers. Here’s the report, and I really want everyone, people in LPR/DPR, in Russia, to know that we don’t abandon our own! I’m proud!
Pavel, thank you! Many greetings to Vienna and also many thanks!
The plate on the photo is from the church, not the traditional littlehirosima. This is very good, because many who send aid ask not to be mentioned. One can understand them. On the other hand, many are glad to publicly write they are helping those whom the whole world considers “terrorists.”

Retirement Home No. 1. It was hit by several shells in ’14, which caused injuries. 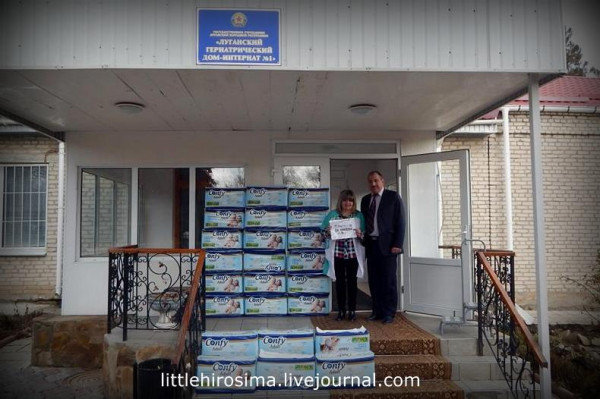 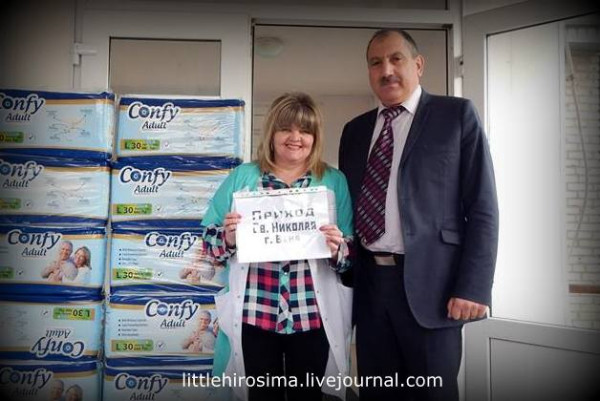 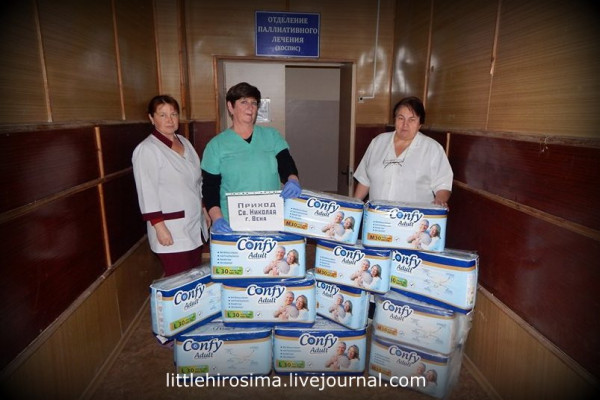 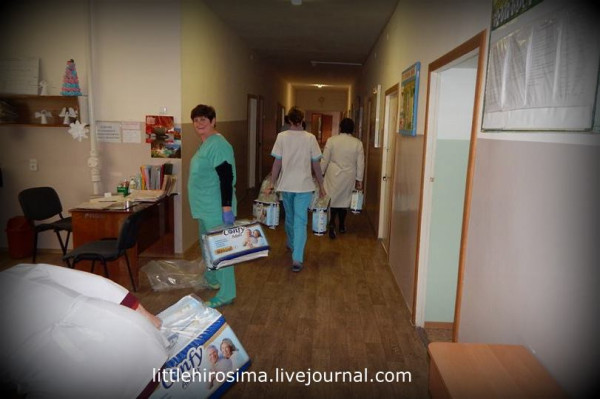