–Hey, open up!
We are pounding on a recently painted gate.
–I’m coming!
Odd–that’s not Sveta’s voice.
–I’m coming! Oh, who are you?!
Vika is feeling the door, her hair is scattered, she’s holding a cane for the blind and is smiling from ear to ear.
–It’s YOU!!!! Awesome!
Vika opened the door on her own. For the first time. Every other time we visited them in Lugansk, we were met by Sveta, her mom, while Vika waited for us sitting on the couch. But this time, Vika did not simply meet us, but took us to the room. Sat us down and then went to change her clothes, by herself, “for the photos.” All the while cheerfully ordering mom to feed us dumplings.
We’ve all been all smiles during our recent visits to Vika. Sveta, Zhenya and I, Lena, Vika herself. We see each other rarely, but we’ve grown close. So we are happy))) 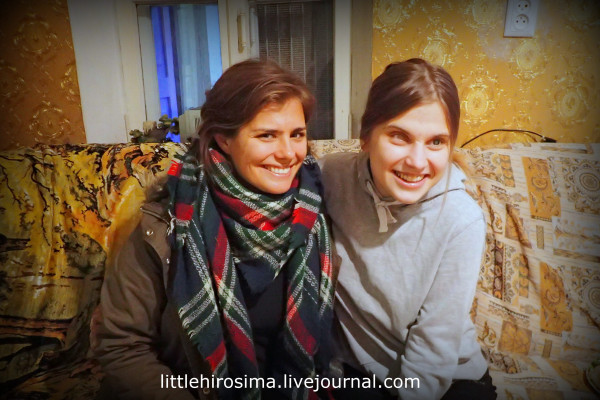 For those who are on this page for the first time, let me copy what I wrote about her before. To read other posts about Viktoria Zozulina, click on the “Vika” tag at the bottom of this post.
Vika has been under our care since May ’15 when we first met her in critical condition.
It was after the bombardment of Lugansk. After the death of her brother, a diabetic. Vika has had diabetes since age of 6. Due to the stress she stopped eating which led to a catastrophe. She lost several of her front teeth, her health collapsed, and she lost her sight. Within a few weeks a perfectly healthy person became blind. She lost lots of weight and nearly died due to all manner of health problems. It later turned out the brand of insulin she was given in Lugansk made things worse for her.
We began to regularly assist her. Got her into a hospital, helped with several surgeries in Lugansk. Her mother was also heavily stressed after her son’s death. Later we took Vika to Moscow thanks to Irina Bednova to cure her eyes. But there we learned she had TB. One thing after another. She remained in Moscow and was treated at a TB clinic. Thank you, doctors who admitted her. Because she had no insurance policy. Since treatment was ineffective, she underwent a surgery that removed part of her lung during the summer of ’16. Many remember the posts written from the TB clinic–we and Zhenya, Lena, Lyosha, and Tanya took turns constantly visiting Vika.
Vika’s sight deteriorated to the point of blindness, doctors refused to treat it. Said it was hopeless…
Vika and mom returned to Lugansk. Then we and you spent more than a year collecting money for TB treatment. Such drugs can’t be gotten in Lugansk. Anywhere. We bought them in Moscow and sent to Lugansk. 40-50 thousand rubles a month worth.
And yes–we did it! It was a miracle every time, and every time I couldn’t believe it was possible. But you made it possible! We are continuing to help the family. Vika needs a multitude of eye drops, test strips, nutritious food–diabetes is not curable, and she has a severe form of it. Vika is still learning to live with her blindness. Sveta is still afraid to find work–Vika has to measure blood sugar frequently, she’s had a hypoglycemic coma recently. She can’t see glucosemeter indicators.
A couple of months ago, Vika could not even walk about the house without mom’s help.
Now, as you can see, she’s even met us on her own. She started to go outside for walks and to go shopping. 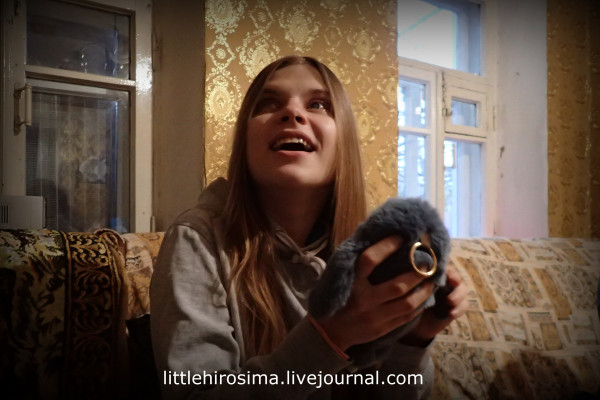 My friend sent Vika several presents–perfume, a fur bunny, and other things pleasant for women. Vika was very glad. If you want to send something for her, we’ll all be glad for it. The girl loves presents and, even more so, attention. We accidentally learned that even her classmates still don’t know what happened. They don’t know she’s blind and is forced to spend nearly all her time at home. 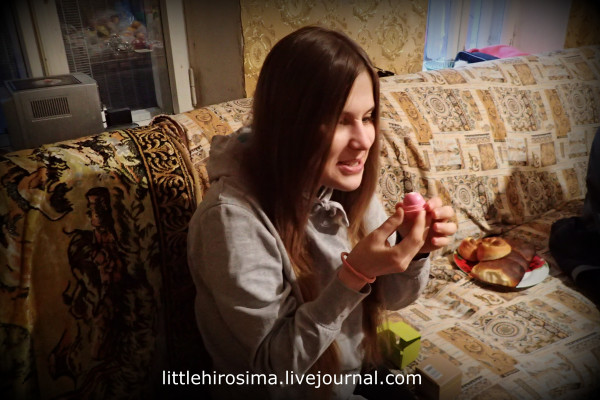 Last time I wrote Vika is a great singer. Her repertoire is different–I’m no expert in this kind of music. But she has a strong voice. Gives you goosebumps. So I secretly recorded her. We got a full-blown concern and Vika moreover has been working with a singing teacher. This kind of voice should not be unnoticed–that’s what I think.
When Vika sings, she transforms herself and blossoms. She really likes to sing and that’s very important. She not only has not given up, but has acquired a hobby.

Our beauty recently appeared at a concert for the disabled. Lena went there and took photos. 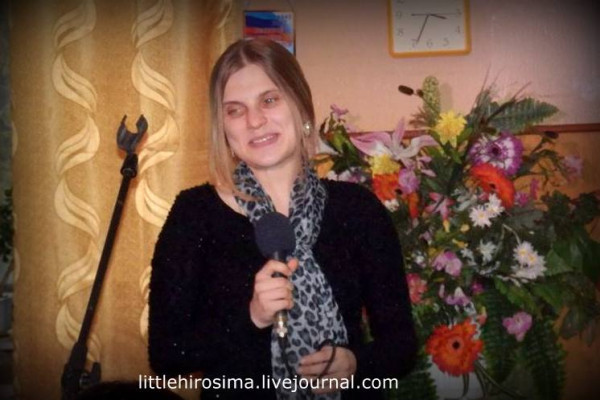 Nothing short of ecstasy, and it’s remarkable how she changes while on stage!
I think that Vika definitely work on developing her voice. 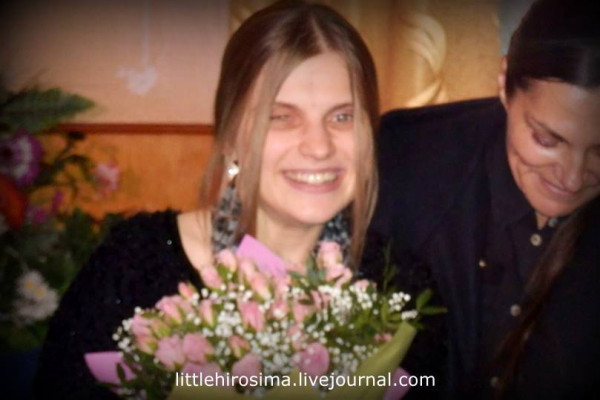 I want to thank everyone who help Vika. There are not a few of you who remember her, who send money, presents.
Together we have worked a miracle–and helped this little girl survive.
Thank you Denis, Adriano, Karl, Katya, Natasha, Tanya, Lena–everyone!
Vika and Sveta are sending you heartfelt greetings and a mountain of thanks!
So, all in all, things are on the mend!
Not bad, right?
Dear Lord, how happy I am for this girl!!! 
One thought on “Things are on the mend”