I like this photo, this dress, this smile.
Vika can’t see, so she doesn’t know where to look when she’s photographed. And though she poses, she’s easy to “capture.”
When she listens, she slightly tilts her head forward and furrows eyebrows, squinting slightly. And she always giggles. She’s still not used to her condition and believes she’ll see again.
Once I referred to in jest “little bellflower.” And she is like that. She’s a beautiful and gentle flower. And she laughs all the time, no, she rings.
Zhenya recently delivered her life-sustaining medications from us. 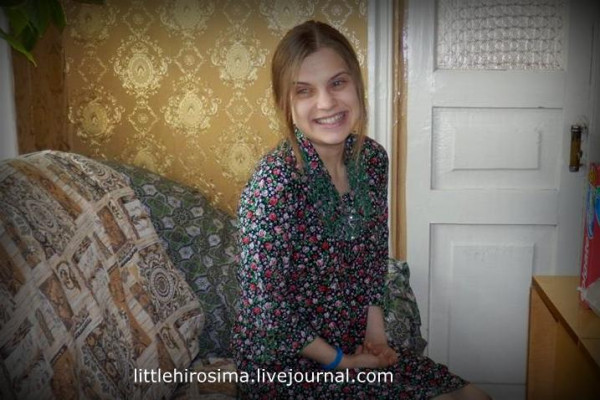 Vika suffers from diabetes and has lost her sight. But that’s just the top of the iceberg that cannot be squeezed into a single post.
Lugansk, summer 2014. Then her brother’s death, comas, lack of insulin, lack of money, salaries, benefits…She stopped eating, began to fade rapidly. Everything went into a spiral, and mainly her eyesight. But she had a good life before the war even with the diabetes. There were no problems.
Then a chance–we managed to take her to Moscow. We hoped to cure her eyes, but it turned out on top of everything else she had TB. Thank God we were able to place her in a TB clinic in Russia where she spent 6 months, but it didn’t help. Surgery removed a chunk of her lung.
Then home again. She’s been there for less than a year, and she keeps taking the medications you and us are buying for her. In addition to TB drugs, we’re procuring eye preparations and test strips for the glucose meter. If it weren’t for you, she would not be alive. I feel odd writing this, because I write about Vika every month. And I write the same every time.
Vika’s family is tiny–just her and mom. Brother died during the war..Also diabetes. A sad tale.
The grandma passes away when they went to Moscow for treatment in ’16…The grandma was bedridden and apparently could not take the separation. The father hasn’t remembered the kids after the divorce.
Sveta, Vika,s mom, is afraid to leave her side after her last coma.
They are surviving as best they can. Family garden and the like. But the medications she needs cost 40-50 thousand. These are fantastic prices, given average Lugansk salary of 4,999. And the most important and expensive medications are not available in Lugansk. They can’t even be bought, let alone gotten for free.
Thanks to you, we are collecting money and sending her what she needs.
Thank you!
I want to say that Vika still needs help, her treatment is not over.
Please label all donations for Vika “Vika.” 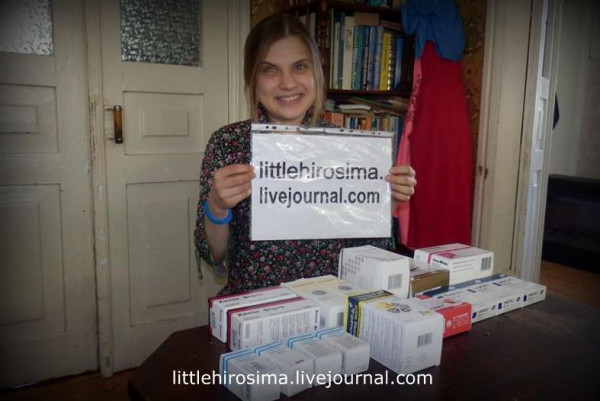 Her mood is good, but they have it rough. I sense it from my correspondence with Sveta. They are together all the time, and Vika is a young girl. They don’t go almost anywhere, except to have a walk…
We’re thinking we need to come up with something interesting and take her out into the world. But she’s embarrassed. Doesn’t want others to know she can’t see. She’s embarrassed by her condition.
She and Sveta live off welfare payments, but now Sveta has to replace her passport since she’s turned 45. Which means she needs to get a new LPR passport, because the Ukrainian one can’t be replaced. Zhenya wrote “no passport means no pension payment at the bank. Our passport takes three months to get. People get in line at the police station at 4-5 am to get one. Only those get served to arrived before 6-7 am.”
Vika still needs medications and our help. She simply can’t do it on her own.
I remember her two years ago–dying and fading before our eyes, with no will to live. I wouldn’t have believed she really was a “bellflower.” Now she’s a different person. I want her to finally live a normal life.
To the extent one is possible given the wartime situation at LPR and her disabilities.
The war broke many lives. It also broke Vika.
None of that would have happened without the war. War.
I’m pained to see her embarrassed for her blindness. She’s not the one who ought to feel shame.
Damnation to all who were responsible for this hell. 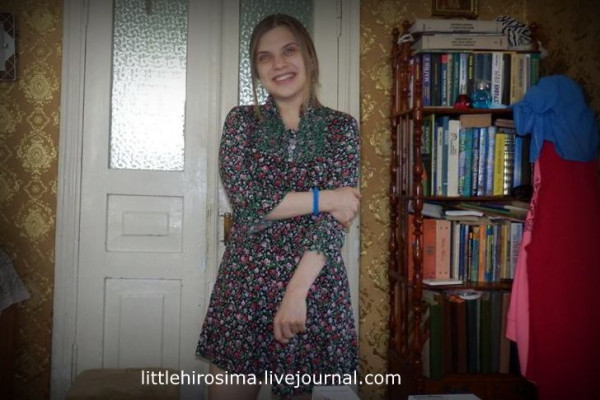 We also brought some food.
I once again want to thank everyone to sends money for Vika. Who remembers her. 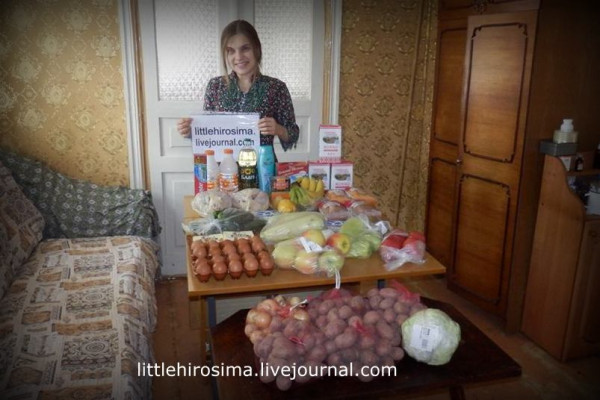 Medications for Vika delivered from Moscow. 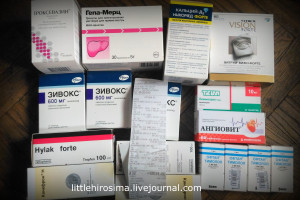 
One thought on “Don’t be embarrassed!”