–Dunya!
I’m grabbed by the hand and next thing I know I’m being smothered by hugs. I recognize Elena Fyodorovna. We’re standing in Pervomaysk’s center, next to the Lenin and the burned out, already rusted, fragments of Grads and Uragans.
–You thought you could get away? Come, I’ll show you! Come, come!
We came to Pervomaysk, a city close to the UAF-controlled territory, two years ago. Within a few days of our arrival a stairwell was crumpled by a single shell. On the Makushkin street. I remember there was nobody in the city: either they left or they were hiding in bomb shelters. We walked up to the stairwell’s remnants. A sink was hanging off the third floor. Next to it there was a shelf with brushes, tubes, shampoos. A bit lower, one could see the shower hose, hanging as if it were entrails, and reflecting the sunlight. The only thing that kept the sink from crashing to the ground were the pipes.
I’ve written so many times about this sink that its very mention drives my readers to nausea.
But it’s one of the most vivid sights I’ve seen on the Donbass. I don’t know why. Perhaps because I was very frightened then. And the sink was a lot like me. Touch it, and it would crash. This apartment with the small cupboards belongs to Elena Fyodorovna Chernyshevskaya. We made the acquaintance a year after her house was destroyed.
Elena Fyodorovna is raising two grandsons on her own. Her daughter died before the war, from a heart attack. Nobody knows where the father is.
Seryozha, one of the grandsons, was wounded during the summer of 2014. Wounded in the head, and he was evacuated to Rostov.
The grandmother carried her granddaughter Diana in her arms, under shellfire, when she went to see Seryozha in Stakhanov before he was sent to Russia for a more difficult surgery. She went at night, because there was less shooting. 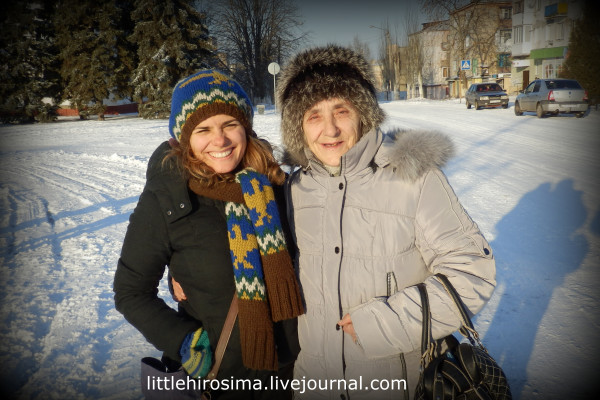 –You see, my home is practically fixed up. Let’s go!
It’s very cold outside and the sun is blinding. Just as back then, nearly two years ago.
Usually when we come to Pervomaysk everything is gray.
Elena Fyodorovna is practically dancing, while holding me by the arm. The grandmother always seemed very small to me, but I look at the photo and she’s taller than I am! Though perhaps it’s because of that funny fur hat.
–Let’s go inside, I’ll show you my future apartment!
–We have to run, it will soon be dark.
–Very well. But you have to come for the move-in party. Promise!
And she gives me a powerful hug.
–We’ll come see you in the evening! Please give these candy to your grandkids.
–Be sure to visit! Will you? Promise! 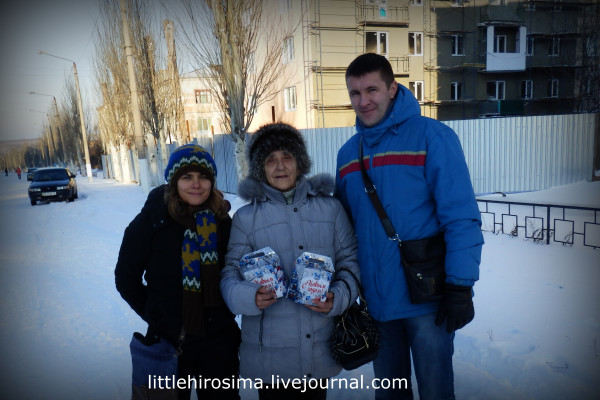 We came to visit Elena Fyodorovna when it was already dark. At the apartment assigned by Olga Ishchenko. Temporarily.
I remember when I visited them the last time, when it seemed that their stairwell on Makushkin street would never be repaired.
That was the sense back then.
Because there was nothing left. Of the stairwell. Or of the sensation.
But Pervomaysk is slowly rebuilding. And, you know, in the two years since that February Pervomaysk has really changed. I made the first acquaintance with the city when it was badly bloodied. Every, dear Lord, every single home had some damage. If only broken windows or something like that. Many houses were totally burned out.
But now…
Now many of the stairwells have been rebuilt and are being settled. Multi-story apartment buildings are getting new windows. Fances are being painted, shops are open.
That’s a miracle.
Because for the longest time, Olga Ishchenko, the acting mayor of Pervomaysk, was being denied assistance in rebuilding.
“It’s pointless, the shells will destroy it again.” They wouldn’t give out construction materials or assign workers. To this day, the city does much of the work using own resources. You and I helped a bit, too. Pervomaysk is in the line of fire, but the city has been quiet for a long time. Unlike the unfortunate Gorlovka.
Shells have been hitting only the outskirts.
The city itself is enjoying a vibrant life.
The youth restored a fountain which now operates on the weekends.
There are cafes with wi-fi and even manicure salons.
Pervomaysk is being reborn, even though it was hard to believe just recently.
That’s how it is. The kids have grown, and soon they’ll live in their own homes.
I can’t quite convey the emotions)
Thanks to all participating in the aid effort. And greetings from Elena Fyodorovna and her grandkids!
URRRAAA!!!