Lena’s hair reaches down to her legs, and few can withstand the gaze of her eyes. Zhenya is tall, so much so I barely reach his chest. He speaks with a low, deep bass voice. Lena–so that you realize what kind of a person she is–sat to the very end with an unfamiliar woman at the Lugansk Hospice. Who died practically in her arms. It was Katya, a young girl who was diagnosed with cancer too late for it to be treated. She was from an orphanage, had no relatives on the Donbass. Lena kept vigil at her bed at night. Because there was nobody else to help her. Dying Katya had one son, Vovka. Her husband vanished somewhere in Ukraine, abandoning his family. The guys–Zhenya and Lena, took him in, even though they saw him only twice prior to that. It will soon be a year since Vovka joined the family. In the midst of war and uncertainty, the two of them adopted a 12-year-old. Now he’s one of our assistants, who brings me tea whenever I’m about to drop dead from fatigue. Zhenka and he struggle with homework until tears roll. Because while his mother was dying, he missed a year of school. Our Moscow Zhenya never did math exercises with him during the trips. At the time, we collected clothes for him and delivered a computer, it’s all described in one of the reports.
Vovka is also a member of our tiny team. Zhenya previously wanted me not to write about it for various reasons. But it’s hard for me not to write about it. It’s been a year now, and I’ve seen it all. How they made their decision. And how difficult it was–after all, it’s not easy to take in someone else’s grown child.
It’s a little detail that will give you an idea of what kind of people life brought me in contact with. 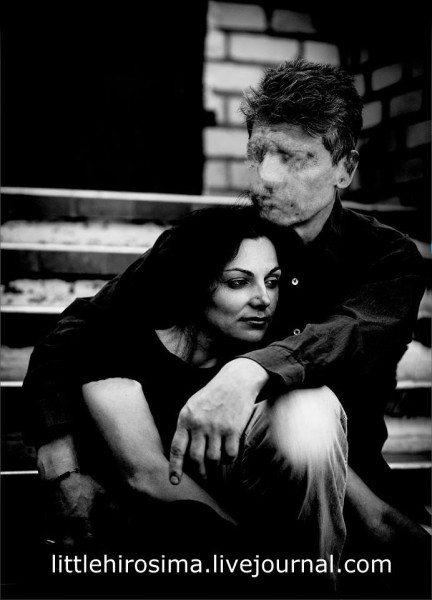 I love them very much. Not even because they are so kind and amazing. Not for the borshch or the desire to help. There is something genuine about them. Their own. There are some good people who do everything properly. But he’s a stranger. Zhenya and Lena are not. They have this inner force that few people possess.
I want to thank all of you.
Thank you for responding for my plea for help for my friends.
Many people responded, and I still get phone calls and messages asking how they are doing.
Many of my acquaintances who previously never donated money suddenly wanted to help our team.
We were buried under a wave of your best wishes.
Thanks to all for your contributions! It was a great help. Because the medicaments alone cost about 24 thousand rubles… 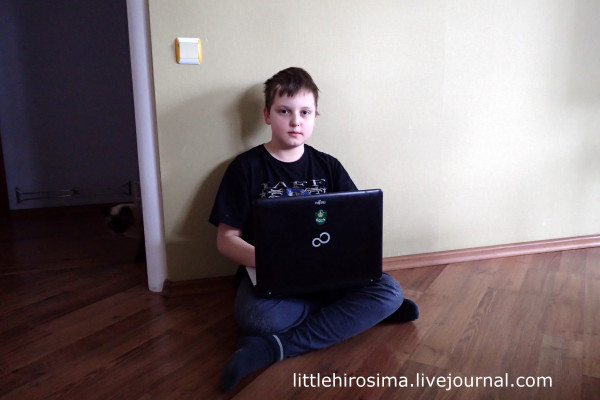 Now, about the guys.
It seems that old dogs can’t be taught new tricks, because Zhenya, as soon as he left the hospital’s confines, began to write about various families in hard times who need immediate help that nobody else can provide. While he was at the hospital, he was constantly on the phone with recipients of our aid and helped solve problems remotely, concerning Kolya, Ira…
The doctors were not able to determine the cause of Lena’s headaches, but they are almost gone. Although she still suffered from them at the time of discharge.
Two MRIs were performed, of the cranium and neck vertebrae, and found everything in order. A duplex scan of brain blood cells (pardon me if that makes no sense, because it makes no sense to me either) also found nothing. They did find problems with the liver. So now she’s swallowing pills by the fistful and is on a strict diet. Soon she’ll undergo a new round of analyses.
Zhenya’s situation is all within norm, considering his age, condition of blood vessels, and stress.
All in all, everything is clear. The two are under major stress. Which is prolonged and continuous. Zhenya’s mom suffered a stroke in April, since then she’s been on the edge herself as her health is in bad shape. His father has blood pressure problems…
And, of course, the two survived the entire summer and fall of 2014, with its constant bombardment.
Thank you again for helping my friends!
I’m posting medical history extracts and receipts.
In addition to the money for the medicaments, we’ll also furnish them with cash.
Thanks you all! 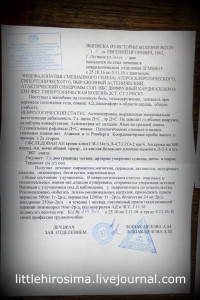 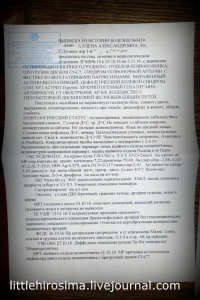