I have nothing to say about the US elections. But I do know that Zaitsevo and other border towns on the Donbass were being ground to powder at that time. People died, houses burned. In the literal, not figurative sense…
I also know about ordinary people’s lives in this unusual region where a war is raging.
Everyone’s gotten used to it. The inhabitants are used to it, we’re used to it, I’m used to it. But everyday activities, for example, the operation of hospitals and hospices, suffer from problems whose existence we don’t even suspect.
This is the Lugansk hospice attached to the cancer ward. That’s where our Ira is.
These institutions have the lowest priority for aid. Medicaments are most important. The rest is an afterthought. But how is one supposed to wash, disinfect, do laundry? Nobody’s thinking about that. If they are, they lack the means. And yet this hospice where the ill come to die. Many of them can’t even take care of their basic needs anymore.
The doctors and nurses need paper and pens to write on and with, but those are shortage items too. Lightbulbs do burn out, and switches break, like everywhere else.
The workers here have to bring their own supplies from home. Just think about it–the workers spend their miserly wages so that there is light and paper ant work…And so that the ill are able to read books in the evenings… 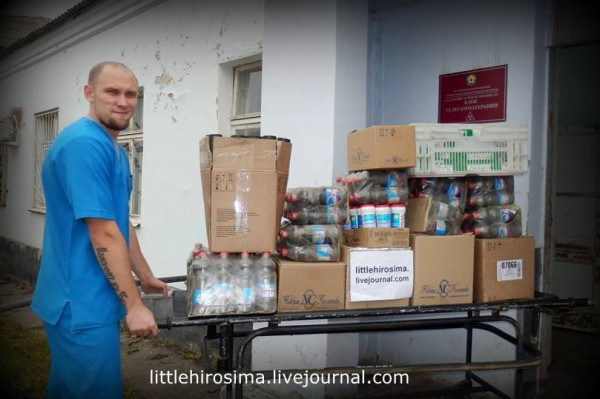 We’ve helped this hospice more than once.
I visited it only once, but I remembered it well, including the head nurse and the head doctor.
We couldn’t break free of them for an hour and a half, even though we were in a hurry to get elsewhere. They sat us behind hot tea and told us, with every sign of pleasure, about the ill. They spoke with such involvement, as if I could figure out the complex and terrifying terminology.
They told us about the miracles which happen here. Even in the hospice. In a wartime city…
They also turned to us with a plea for help. Zhenya is very protective of this hospice’s workers. Here’s what he writes:
“When the girls see us in the city, they run up to us and hug us. And their eyes… They are so bright with joy that it can’t be an act. And you know…all of this is costly. But when you ask yourself “why am I even doing this?”, you see these eyes and that’s answer enough. And you understand and realize there is something to live for…Golden people, may God give them health…Constantly around dying people, and still not jaded, not cynical. That in itself is a feat.” 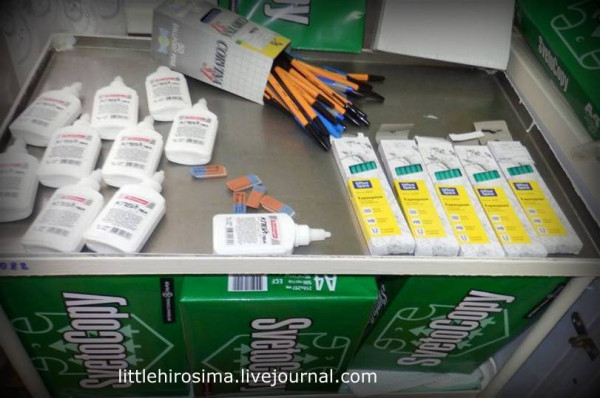 In addition to office supplies and the usual cleaning supplies (powders, bleaches, sponges, dishwashing detergents), they insisted we bring trash bags, shampoos, rubber gloves and, yes, light bulbs. None of these are being issued through official channels.
Zhenya said the director told him “The ill come to us in such condition that you’re not about to ask them to bring their own light bulbs or paper. So we spend our own money.”
This is practically the norm in many L/DPR hospitals. In the Novosvetlovka hospice which opened in what used to be the hospital’s maternity ward, the patients’ relatives bring cleaning supplies and diapers. Because otherwise they would have none. 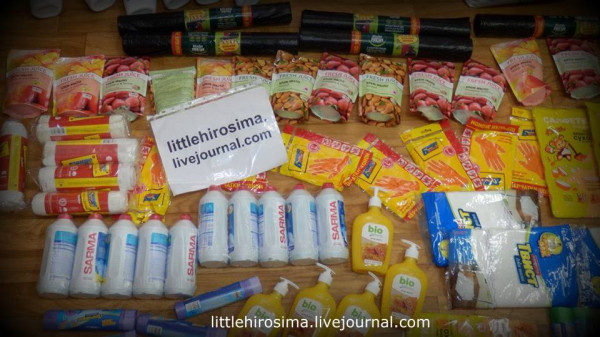 Тhis is how the region is surviving, on a day-to-day basis. Hospitals, utilities, everything and everywhere.
With only one “but”…

Our humanitarian aid. Thank you for participating! 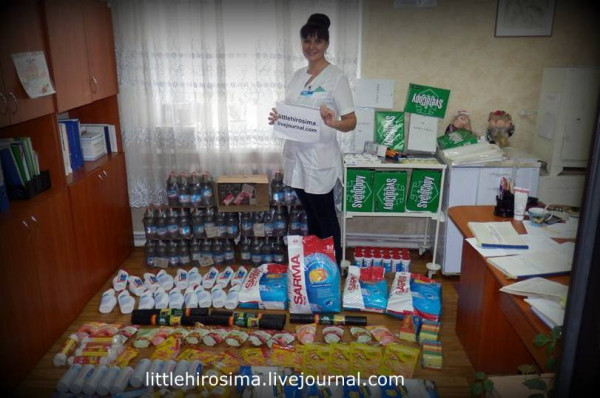