I was riding the subway with my daughter, and it so happened that a pair of kids stood opposite us–a hemp-haired boy with his girlfriend.

They were kissing. Right in front of everyone. She was of short height, and she stood in front of him, in a red beret and, with her head tilted back, was totally absorbed by him. He embraced her firmly so that they appeared to be a single entity. Glasses were off to the side, hair stuck out in every direction. Feodora started to grow embarrassed and to turn away. The pair couldn’t break apart the whole way and my daughter was trying to get my attention by poking me in the side or by whispering something through her giggles.
An older woman sat next to them, and her face made it obvious that she did not like that at all. She did not like the couple.
She made hand gestures, shook her head, moved her tongue, and said things out-loud.
“No shame,” “no honor,” “children are watching,” “immoral.” She kept it up the whole way and I thought that at some point the young couple will be confronted. And I didn’t know what to say to my daughter–she was inquisitively looking at me, but I was embarrassed myself.

We were driving to Pervomaysk. It was an odd day–one minute clouds, next minute sun, then icy cold. Constant shelling on the town’s outskirts resumed in recent weeks. It was powerful and loud–almost constant losses among the military. We traveled with an odd sensation. After the lengthy quiet, calm, we had rediscovered the old feeling of dread when approaching this town. When you realize the war could begin at any moment or that it could end altogether.
It’s difficult to convey this sense of disquiet when you constantly hear that the offensive is about to begin, and then it doesn’t begin for a thousandth time. The odd sensation of going into a city that suffered more than any other in this strange war.
And then suddenly we saw a couple on the roadside. They stood on the road’s edge and were kissing. The wind was blowing, strewing her hair in every direction. He was embracing her while she stood on tiptoes.
I was instantly reminded of that pair in the subway.
I think there is nothing more beautiful in the world than kissing people–on roadsides, bus stops, benches, and escalators.
There is no debauchery, immorality, or anything that kids should not see in that.
Kids should not see bombed-out cities, should not see their aunt’s torn off limbs, about which they will later argue with other kids in the orphanage. Kids should not see how grenades blow up their fathers.
Should not–those aren’t the right words. It’s more like, must not.

Now I know what to tell my daughter. 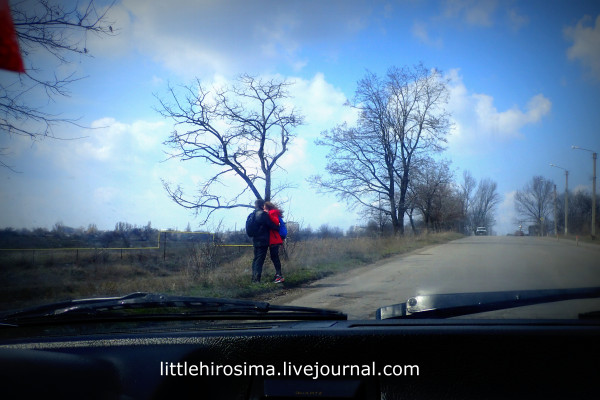