Every couple of months I succumb and begin to howl like a wounded beast. I curse my hapless newsfeed with its cats and palm trees. I wring my hands and whine nobody cares about the war. After that I usually get comments from people who do care, reassuring me they remember and worry. Some write that it’s impossible to live in stress for three years on end, one has to rest too. And that I don’t have the right to demand constant compassion and concern. And what can one do anyway?
I write this every time knowing that I do this mostly for myself. Due to the sense of hopelessness-what can one do but write when you see it with your own eyes?
What can I do? A month ago I was frantically calling on people not to remain silent, but to write and speak out.
But nothing happened, which I find the most maddening.
I’m mad that I personally can’t do anything about it. I’m mad about my own powerlessness, outside of my writing.
And nothing is happening.
When I was 12, I remember how I sat in a room with headphones on, and suddenly stopped breathing due to all the injustice around me. I was stunned by the imperfection of this world, so much so that I didn’t even cry. I stopped breathing and lay still. Then I thought that one could give one’s life, like a gift, in order to save others. It was a typical moment of youthful self-realization that everyone experiences. The naive thought that you can change something with your life or death.
In December, we went to the Donbass with another batch of aid.
Just a week before our visit Inna’s house, practically in the center of Pervomaysk, was hit by a shell.
It was December 13, 2017, 1:30am.
She and two children were sleeping in an adjoining room when the shell struck.
Both the kitchen and bathroom were destroyed. Look at the photos she gave me. 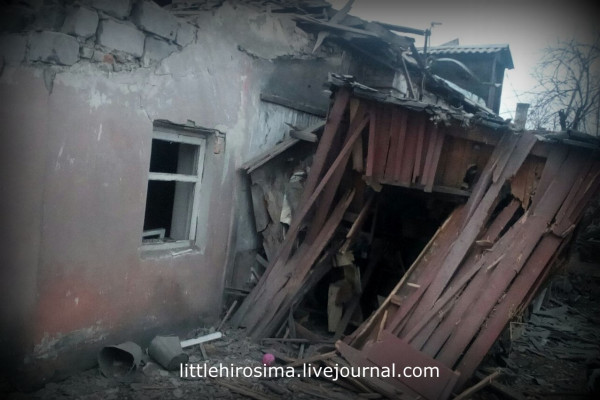 By irony of fate, she was not on the Donbass in 2014, the hardest year for the Donbass.
She and the kids left to escape the bombing. When the city was being killed by all kinds of artillery and aircraft. 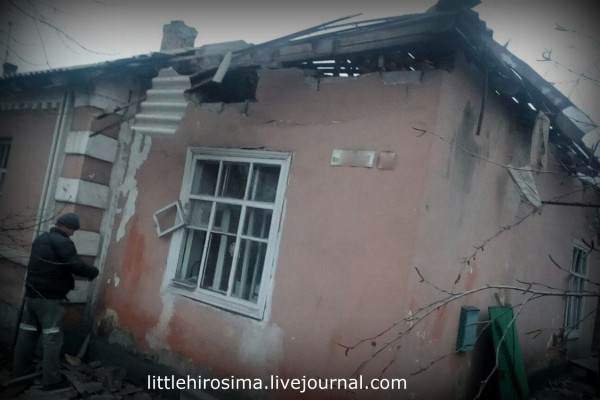 Having waited out the worst, she returned home when shells nearly stopped.
And…woke up at night due to an “incoming.” 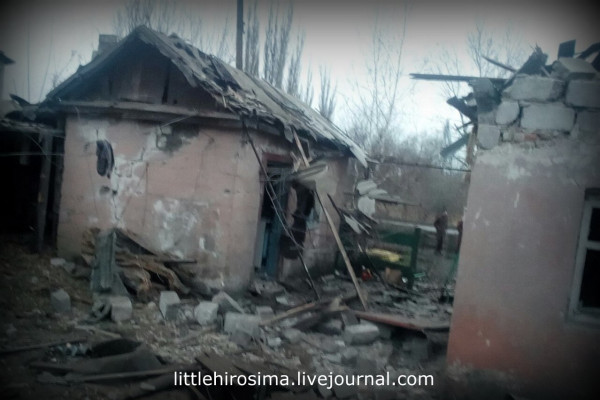 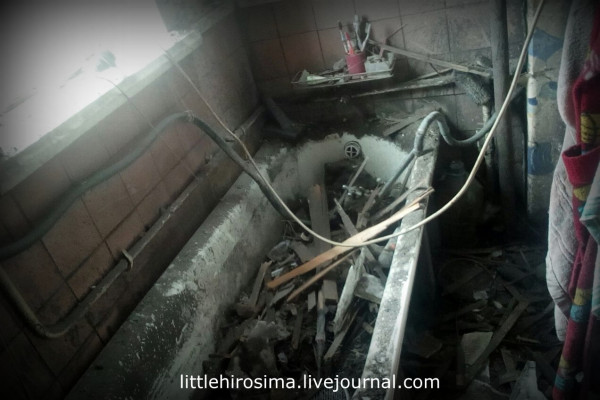 In less than a week, the house was fixed up. Communal services now react instantly. They are on the scene on the same day. But they can’t restore the internal finish, or replace the furniture or, most importantly, replace that which the people lost when the shell struck. That will stay with them for the rest of their lives.
The fear, when you wake up at night and don’t know whether your relatives are alive. Whether you are alive.
When everything around is roaring and crumbling. 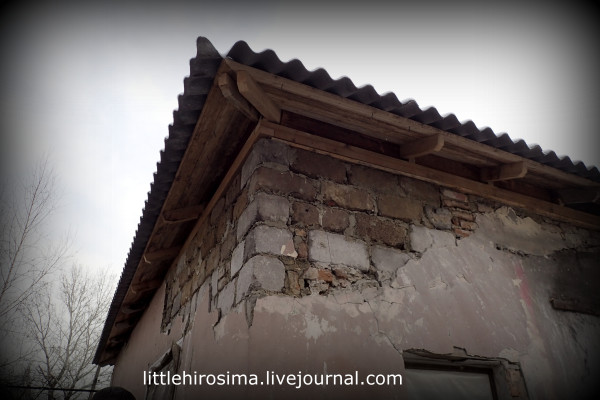 Just try to imagine. In detail.
This can happen to hundreds or thousands over there, on the Donbass.
With people who have become hostages.
But no, we are not at war.
How can one justify that?
What kind of piece of human garbage must one be to believe that children and elderly deserve having to sit in bomb shelters? 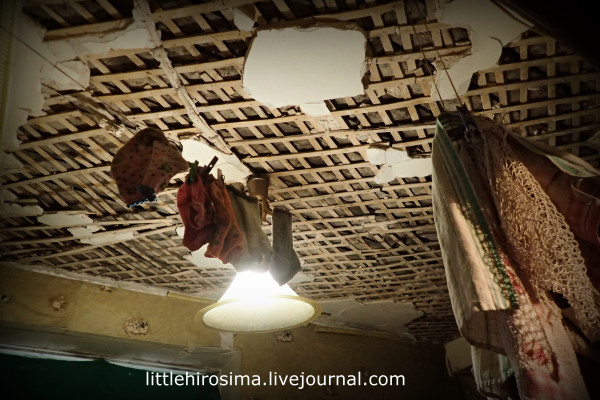 They are killing people, it’s as simply as that, for nothing. People like us. Not any “citizens of another country.”
It’s us.
They are killing us.
I’m not 12.
I’m 33, and I know that nobody’s death will change anything. But my breathing stops just as it did then.
May it be that way.
It’s good.
It’s right.
Because that’s life, and without it I’d be dead.

This bomb fragment was found in the Krupskaya Park in Pervomaysk.
You like going to museums? I don’t, and perhaps I visited the local history museum only after two years of constant visits to this city.
You won’t notice the bomb immediately–it’s off in the corner, and its huge.
The other exhibits take up half the room. For example, Smerch rockets.
Once upon a time Grad and Smerch were mere words. Now I can even tell them apart. Local kids can distinguish not only by appearance, but by sound and range–tanks, howitzers, mortars, etc. They would correct me when I tried to guess who was shooting. 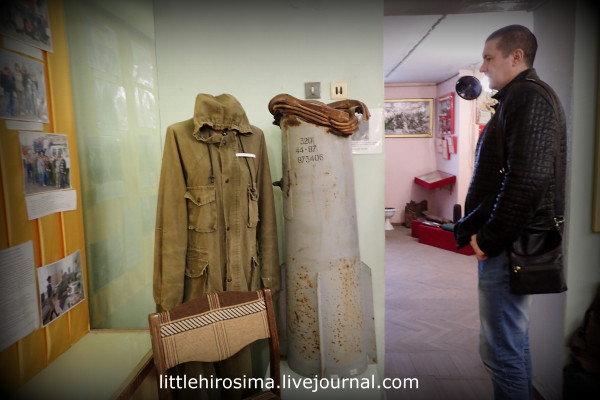 END_OF_DOCUMENT_TOKEN_TO_BE_REPLACED

There was hail in Lugansk.
The sort of hail that is not written using a capital letter or quotation marks [a reference to the Grad, i.e. “Hail” 122mm artillery rockets used to bombard Novorossia’s cities].
The right sort of hail.
Which makes you run into the house and lock the door behind you with wet hands just in time.
There was thunder off in the distance. Prolonged and loud.
Today, at the market, we heard distant shell explosions. Nobody even turned their heads–everyone continued moving between the stalls.
Besides, why turn one head if it’s so far away? Buying food for the supper is more important.
END_OF_DOCUMENT_TOKEN_TO_BE_REPLACED

Lugansk always greets you in a new way.
Either with a bombed-out road at night, or multi-kilometer waiting lines at the customs.
This time it met us with a calm haze and a stunning sunset, which provided a backdrop for the harvesters.
And yet even during the summer of 2014, when shells were exploding, the harvest was also brought in. But for some reason this time this sight made it possible to relax.
Big machines, smoothly doing their job. No matter what. 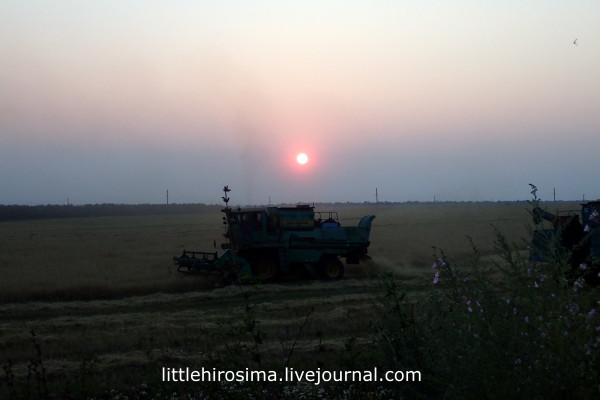 END_OF_DOCUMENT_TOKEN_TO_BE_REPLACED

If you want to see a city, get on a bus.
If you wanna understands its inhabitants, ask for cigarettes from passers-by at bus stop.
If you want to absorb the essence of time and place, look at what’s written on the walls.
“Kittie was here,” four-letter expressions of fertility, and “Masha is a stupid c***” is the very essence of life.
Zarya (Dawn) is one of the militia battalions. 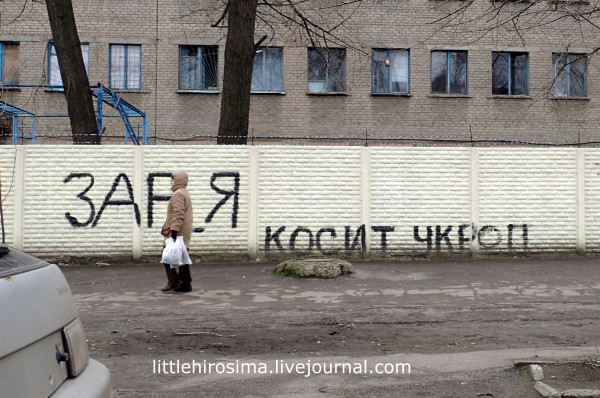 END_OF_DOCUMENT_TOKEN_TO_BE_REPLACED

I was riding the subway with my daughter, and it so happened that a pair of kids stood opposite us–a hemp-haired boy with his girlfriend.

END_OF_DOCUMENT_TOKEN_TO_BE_REPLACED

I have dozens of gigabytes of videos and photos from my most recent trip to LPR. Orphanages, shelters, dormitories, families hurt by the war. Photos of shattered streets, destroyed houses.
But I don’t know what to write. But what in the hell can one write that’s new?

END_OF_DOCUMENT_TOKEN_TO_BE_REPLACED

Every time I arrive, I always have the sense of emptiness.
And at the same time the sense of fullness that overflows all boundaries.
One either wants to write without end, or keep silent forever.
The life within the Republics is continuing, and I am trying to capture it.
“Ilyich in a forest”?
That’s rich. END_OF_DOCUMENT_TOKEN_TO_BE_REPLACED

We arrived in Pervomaysk right on that day.
The city has bloomed.
Half destroyed, showered by shells, it was nevertheless basking in the Sun.
And it was made beautiful by its girls and women.
We arrived, as promised, with gifts.
Olga Ishchenko, the wife of killed Zhenya, is continuing the work of this great Man. She’s now the acting mayor.
We caught her at the executive committee with a kid. Her eyes expressed extreme exhaustion and indescribable pain.
Pain which cannot be understood or explained. Her lover, friend, comrade, husband, father of her children, was taken from her.
Can you imagine this fragile beauty is bearing the entire city on her shoulders? 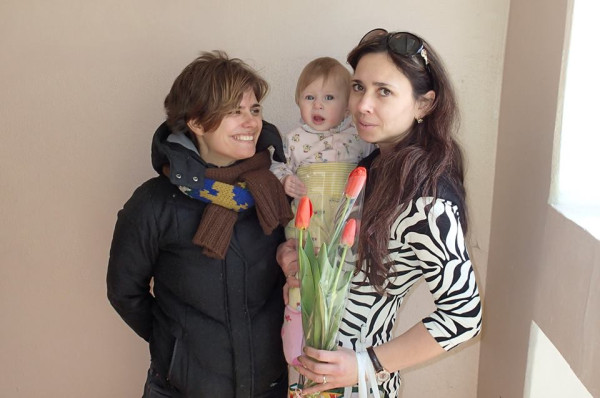