Exactly five years ago I returned from Pervomaysk, LPR.
I was still shivering, but I understood the consequences only years later. Already then, on New Year’s Eve, I sensed the approach of PTSD which has never entirely left me.
I was recently invited to appear on the Zvezda TV channel, about which I wrote sharply and emotionally. Incidentally, my appearance was no less sharp and emotional. The anchor incredulously asked me how I’ve managed to stay positive, having been to war and seen hell.
I’ve always been “Hirosimka”, a positive thinker, but I became a genuine optimist only recently.
Back then, in December 2014, I saw how we don’t know how to take joy in simple things–Mandarin oranges, the vegetable salad for New Year, decorated trees–except in the midst of war. We eternally grumble, things are always bad for us, we’re always lacking something. I remember how back then in LPR trees were being put up and decorated. Even though fighting was still very intense. People had genuine joy. Everyone was asking me whether I had a tree back home, as if that was the most important thing. Turns out it was. Of course, people were asking for peace, were hoping the war would end. But at the same time they were joyful. I returned home to Moscow where all of my friends and acquaintances were complaining from dawn to dusk. I wanted to kill them. I wanted to shake them and slap their faces.
It’s probably then that I became a total and unfounded optimist.
There were many trips to the Donbass after that. So much human suffering that I don’t know whether my fragile human body can withstand it.
It probably cannot. On its own.
But I am not alone. You have been with me all these five years. I would have episodes of hysteria, desperation. I wanted to abandon it all many times, but a single thought that you were with me always helped.
And now it’s a New year and we are still receiving donations for aid. Dear Lord, we are receiving donations for our single grannies, for multi-child families, for cancer patients, children. I don’t know how people find the time, before the holidays and all the craziness nevertheless remember. And today I received many messages from people asking how to donate. Miracles!
So how am I not be happy and certain that all will not simply be well, but better than anything!

Folks, thank you not simply for being there, but also for being there for me. Thank you for everything! I know for sure only one truth which you should tell everyone else–In Hoc Signo Vinces!

And like the majority of my Donbass posts, this will be ended with a small report, the last one concerning 2019.

We have a new person under our care, a single retiree Tamara Vasilyevna from Lugansk. She turned 88 in March. She’s had a difficult life. She used to have a son, who died of cancer two years ago. His wife is also disabled. There are no grandkids. She spent all of 2014 in her apartment, hiding from shelling.
She lives off her pension and copes with a range of ailments. We will help! 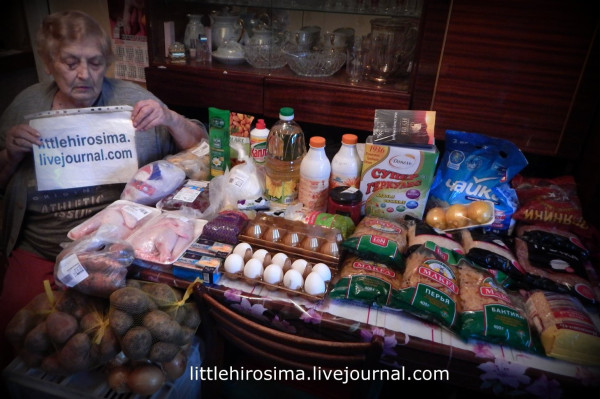