Friends, we have a new family. I often have to read comments about how Donbass people are freeloaders and we shouldn’t be helping them. It’s saddening to have to time and again explain, prove seemingly obvious things. That people there struggle, that there’s fighting there, and it’s not easy to leave. Yes, it’s not easy, and forget aobu tthe stories about how supposedly here in Russia they are being given everything but they are rudely refusing, they only want to come to Moscow. People, let’s just pause and think about the fact that it’s VERY difficult to get set up, and that not everyone can readily do it. Many of those whom we help have left and tried. But failed. And yes, we should not we are not helping every single person there.
Our people are not those who are simply struggling. They are people who are struggling very hard. It’s awful to have to write such things, but yes, we do see tears from people who did not expect the help. People who often have nobody to turn to, nowhere to go to and, it seems were at some breaking point. Disabled, elderly, single mothers with many children. The most vulnerable.
Our new family is like that.
Look at the kids on the photo. Their mother abandoned them.
She probably doesn’t think she did. Simply dumped them onto her elderly mother, their grandmother, and vanished. Left them in Lugansk and went somewhere without war.
Unfortunately, we sometimes see such “deadbeats”, 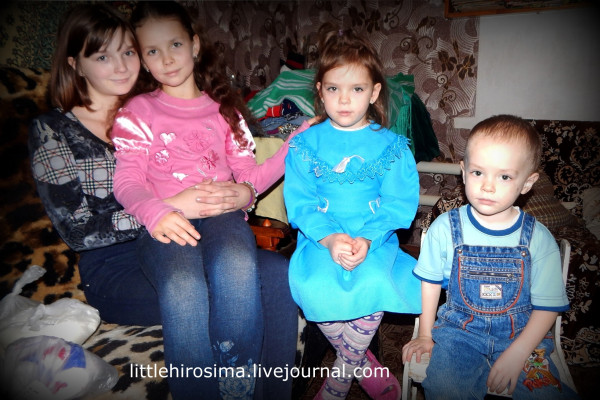 Zhenya, when he told us about the family, wrote this is a “granny with many grandkids”. He referred to Diana, born in 1961. She has 5 grandkids, 4 of whom are in the photo. The woman is in shock and doesn’t know how to feed them all and take care of everything. The mother is somewhere in Russia and doesn’t seem overly concerned how her mother is dealing with her kids. As if she had no idea what it’s like to have kids. Everyone has to have a school backpack, everyone is growing, they need clothing, shoes. Oh, and they also want to eat.
Zhenya: “When Diana spoke to us, her hands shook, she had tears in her eyes, and she kept repeating, “dear Lord, how embarrassing this is”. No money, no clothes, no help from the “daughter”. “Only the neighbors help, many thanks to them”. The mother is alive, which means Diana cannot get child care benefits. Only the pension and the neighbors. That’s it.
She’s also very afraid the grandkids will be taken away…The house is perfectly clean, warm, neat. Diana is working with all her strength, trying to clothe, feed them on her pension while also paying utilities in the hopes they won’t be cut off, and on top of that she’s helping them with schoolwork.
“The older one is helping me”. My experience tells me that Diana could burn out, since she is so thinly spread. This situation is a tragedy for her. No hysteria or hand-wringing, only a clear understanding of the dire situation. Yet she is doing all she can to make sure the grandkids have a childhood.”
That’s where things stand.
Diana is in a difficult situation and she doesn’t know how to cope. I don’t know how it’s possible to grand childhood to four kids on a single pension. Thank God the kids are with their own grandmother who loves them. That is very, very important. More important than anything else.
But life is difficult…One must think about how to deal with it. Deprive mother of custody, try to get benefits. But that will take a lot of time under LPR conditions with the long court waiting lists due to them being inactive for years. 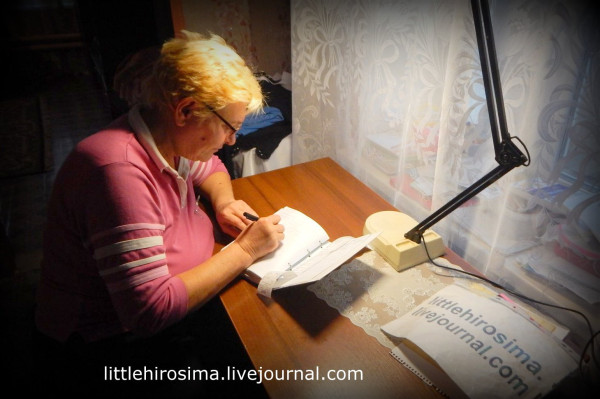 Friends, shall we help this family?
Please label your contributions “Diana”.
Thanks to everyone who is participating in our aid efforts! 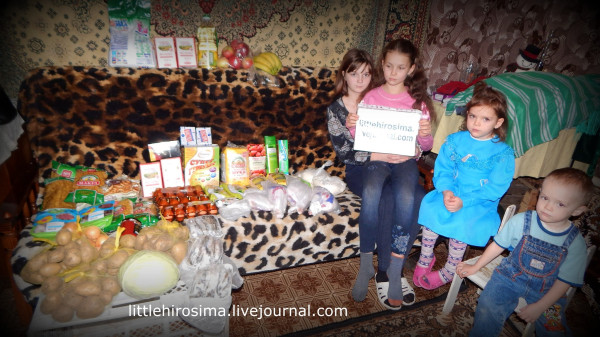 To help this family, please label your contributions “Diana”.