There is a hospice near my home in Moscow. A beautiful one, from red brick, with unusual plants, a pretty guardhouse and expensive cars parking next to it. It’s the First Hospice, located in a nice part of Moscow. As I was walking by, with my face in my phone, a car that I did not notice drove onto the sidewalk. That’s how I accidentally met the woman who was driving. I don’t remember the dialogue, but I do recall well her cry –“Do you know what kind of building this is? It’s a hospice! Do you know what that is! There are dying people there!”. As a matter of fact she was wrong because I was on the sidewalk and she was supposed to let me through, but when I heard her raised voice I was embarrassed. When I looked at the car, the iron gates, my heart suddenly shuddered.
I walked past these walls a thousand times, but now I was suddenly paralyzed.
Do I know what building this is? Do I know what a hospice is?
Oh, woman-stranger, I know what a hospice. Do I ever.
Alas.
In the hospice I visited for the first time there were no diapers, no cleaning solutions. The director asked me whether we could bring reactants…During the bombardments, without water or electricity, nurses and orderlies washed sheets outside and boiled everything in huge vats on open fires. There were people in corridors who escaped the shells because that building was close. This was the Gorlovka hospice.
And then I started to think about other hospices. Hospices over there.
For example, the Kalinovo one where there’s still fighting. At the entrance there was a shell casing serving as an ashtray. A day before our visit a shell exploded 5 meters from the building, breaking kitchen windows.

I’m often asked why I don’t do aid in Russia. Many regions, let’s just say,  are in a difficult situation. Supplies, repairs, furniture. I realize that many hospices are not as comfortable like the one past which I often walk. I’ll say this–I will never forget how the director looked at me with fatigue and joked that since mortar bombs exploded in his garden, he won’t have to dig it up. I won’t forget how he asked us for “more underwear”. Cheap underwear!
Most of the hospice workers in ’14 and ’15 worked for free and these back salaries were never paid to them. They went out under the shells, washed the dying when there was no electricity, took the bedridden out into the corridors so that they would not be hurt by flying glass.
I’m more needed there. On the Donbass. Because…it’s war. Is there anything worse? I don’t know what other explanations are necessary.
Friends, if you want to help us in our assistance to hospices, please label your contributions “hospice”.
This is truly vital assistance!
This time my friend, a young beautiful woman who does not live in Russia, sent money and asked that they be used to help hospices.
Thank you, sister! No other words to describe it. 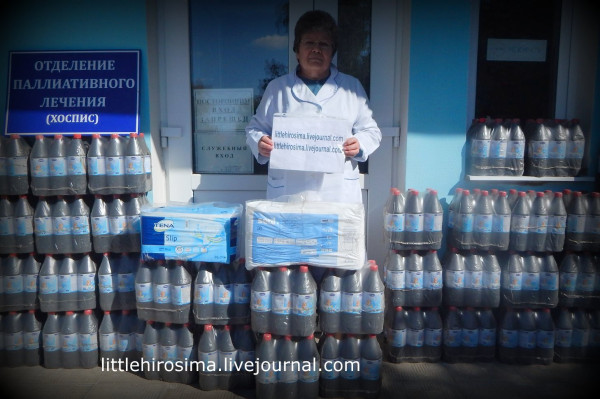 We brought aid to the Novosvetlovka hospice. The one which opened after the war started where there used to be a maternity ward. It’s no longer a place where newborn enter the world but where the adults come to the end of their path… 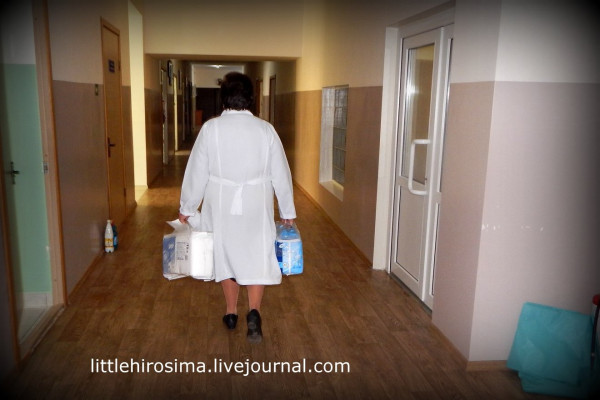 In addition to cleaning supplies, powders, we also brought diapers that were donated by Olesya Klimuk.
Thank you Olesya! Also thanks to our Sasha Shashkova, who helped deliver all this to Lugansk. 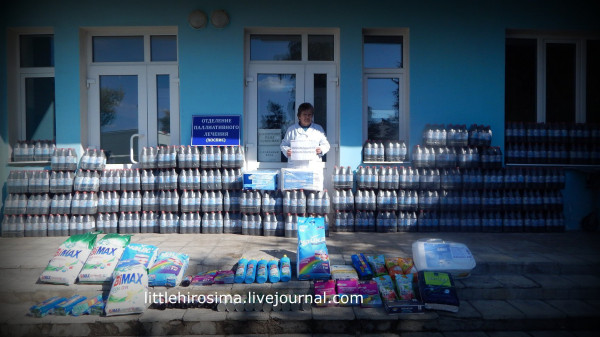 Friends, thank you all for participating in this effort.
In hoc signo vinces!
Letter of thanks from the hospice: 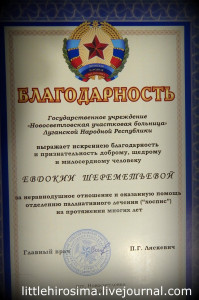