I will arrive in Pervomaysk and you know what? The first thing I’ll do is drive down the Makushkin Street, away from the central square with the Lenin. I’ll be driving between the poplars arrayed along the road as if they were soldiers. They will stand and greet me. Poplars. Then I will turn into a tiny lane. There will be swans carved from tires, and flowers from plastic bottles. I will come to a tiny home, ascend the stairs to the second floor. Along the way everything will be strewn with five-liter bottles filled with water. Then I will hear rumbling and–it’s Lyova, our grasshopper, who opens the door and is dumbstruck:
–Dunya!
–Lyova!
And I will be interrogating our Lyova–what should we buy, what to bring? Why is his leg hurting? What about arm joints? Is he cold? Is there clothing? What about the passport? Lyova, I haven’t seen you for a hundred years, my dear!
And Lyova, getting up on his one leg, will throw off the crutches and exclaim boldly: “look, I can still do this!” And turn around on his one leg. I have seen this many times and it seems he really likes to shock me like that.
I will be in awe, and why not? Lyova lost a leg back in ’14 after a shelling. He’s been hopping along on one leg since then. He uses crutches, but can make do without.
So I’ll be bugging Lyova, and he, I guarantee it, he’ll ask for another book. About physics and the secrets of the Universe. 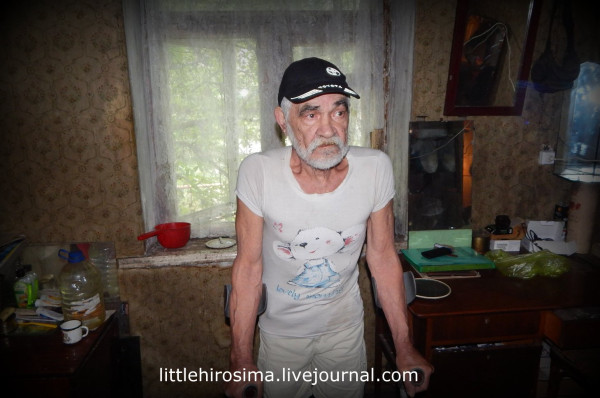 And you know what? Our friends visited him in Pervomaysk during teh summer. I haven’t written about him for a million years. That’s how it turned out, somehow. So it gnawed at me. So I said, friends, find out how Lev’s doing?
We brought him a computer, remember? Got internet for a year, now he studies physics using that computer. He seeks new publications on his favorite topic.
Lyova graduated from the Dolgoprudy Physics-Technical College still during USSR. Theoretical Physics department.
We met him a few years ago. We were told by someone that there is this strange guy, without a family, wife, or children, living with a Soviet passport. Doesn’t drink, is kind, doesn’t have a leg, and is struggling. He had a brother who died a long time ago, and there are no other relatives.
That’s how we met Lyova. He’s hopping up and down the city with his crutches, collects firewood into his backpack, and heats his home with them. He’s getting electricity from the neighbors. Luckily Lyova has amazing neighbors. They help him a lot, even love him. He’s not drawing a pension. Why? How do I explain this. He has a Soviet passport, he’s still trying to get new documents. That’s how we began helping him.
How are things? Not too bad. Naturally, Lyova constantly needs books. It’s impossible to talk to him at all. I’m talking about food and other necessities, and he about secrets of the Universe and how all these secrets can be mathematically calculated. Bombing, hunger, lack of water. Lyova, what do you need? He needs books! That’s how he is!
He once asked me for Friedman’s metric (don’t ask me what it is). Can you imagine! I had to raise the entire physics community to get him something!
But we did get it. Our Grasshopper was as happy as a cat with a bowl of cream. I wrote “Grasshopper”–that’s not my idea, his neighbors call him that, because of his energetic hopping.
So, now about the necessities.
In addition to books, it turned out Lyova’s teeth really hurt. Or rather what’s left of his teeth–the nubs…Something has to be done about that. We took him to a dentist, who discovered a serious inflammation.
Here’s what I want to say. He needs new teeth. And firewood for the winter. He, naturally, doesn’t complain, says he likes this “sport” of collecting firewood. He never complains. But Lyova is already over 60 and hopping is not all that easy though he loves to impress me with his athleticism. And I think he’ll be glad. Let him do his gymnastics for other reasons. That’s what I think.

If you want to help, please label your contributions “Lev”.
Thank you!
I also want to tell the Universe–thank you that Lyova exists. And thank you, dear Universe, for meeting me with him.
Such people, as genuine as any. Living and genuine. No other words.
If only you could see him1
Hear him!
No complaints, not a word of displeasure. He’s happy at everything, he tries to see the positive in everything.
He has that vantage point. Although from that vantage point most people would die of self-pity alone as soon as they realized their situation. But he has books everywhere, he is always interested in new things. And all this in a city which is in the line of fire. In a city where shells still fall!
He’s…one in a million. Or rather even less than that.

Our aid. Thanks to all who participate! 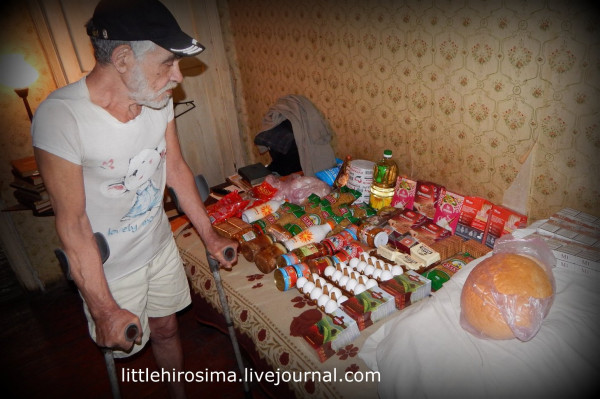