There are posts which one doesn’t want to write.
You put them off, keep thinking that they’ll write themselves. But they won’t. And nobody will do it for you.
It’s difficult to write about Vika. The girl was nearly raped. An elderly dirtbag (“gramps” is what she told the detective) beat her up, tried to do his thing, but failed. Vika was at first afraid to tell her mom and hid at a girlfriend’s place. Then she cried and spent a week under a blanket at home. Vika’s 15. The monster who attacked her escaped. Fled LPR. That’s where things stand–without details.
Vika is doing poorly, she’s still afraid to leave home and it seems she doesn’t realize yet what had happened. And please–there is no need for advice. We know she needs a psychologist, we know she’s been traumatized and so on. We are working on that.
We also know well that yes, the family would be better off in Russia, and it would be good to leave like many others in difficult situations. But that’s great only in theory. Those who give such advice perhaps want the best for them, but are too divorced from the reality of the war on the Donbass and the current situation there. Please understand that if they haven’t done that there are reasons for that. It’s not always that they are “lazy” or want to get “free stuff”, or even “unwillingness to work”, etc.
I wrote about Vika in late July. And dear Lord, comments are still being written. The saddest part is the pile of monsters who wrote Vika looks sexually mature and so on. Yup.
Friends, no matter who you are, is it ever allowed to rape them?
I still believe that the scum who do such thing ought to be castrated and isolated from society. 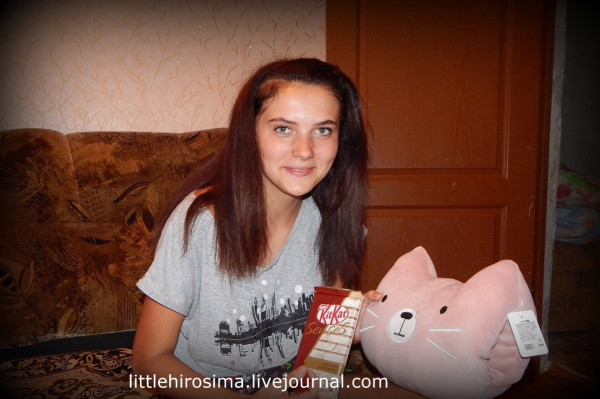 To be honest, even right now I don’t want to write about it. Vika and her little brother Vova and their mom are an incomplete family in difficult straits. We’ve been helping them for years. They live in LPR. Or, more accurately, in Vergunka, a town in Lugansk. Those familiar with the geography know it’s in the line of fire. In ’14, half the houses on their street were destroyed by artillery to their foundations. Ira’s home was also badly damaged. Walls, ceilings. “Daddy” then ran off and never returned. He’s alive–he once wrote Vika on social media. Then vanished.
Ira is struggling to raise two kids. When she escaped the shelling, the house was looted COMPLETELY.
And yes, we’ve been helping them this entire time. Gas boiler, pots and pans, forks, medications, clothing. Of course, also food.
I want to emphasize this: Ira is not a layabout, not a beggar. She works like an ox. We know she’s worked all these years. Even though there is a small child and no husband, no grandparents who could help. She also tends a garden which keeps them fed. She herself has a long list of ailments. Even though she’s a young woman herself. Vika, the daughter, does everything around the house. Even though she’s also in school. Takes care of the brother, cooks, waters the garden.
The town had no electricity for years. Ukrainian military destroyed everything. I remember how they used candles when we visited. Water was supplied once a week. Vovka was only learning to walk then.
Believe me, they are not idlers.
So it’s painful for me to read accusations being leveled at them. Especially the likes of “prostitute”, “sexually mature” really upset me so much that I don’t even want to write about them. 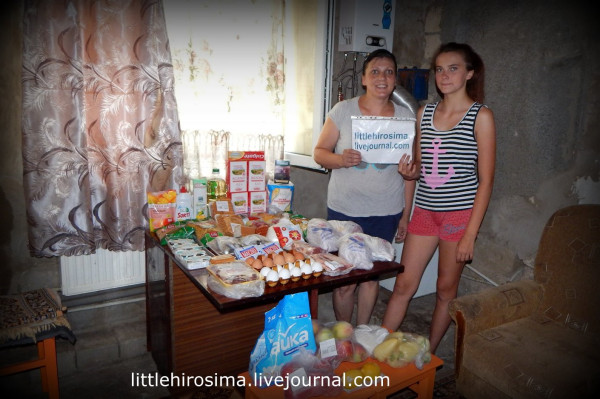 I hope nobody ever finds themselves in such a position. In the midst of war, with a destroyed, looted house. With a runaway husband, with fighting, with a small child. Dear Lord, just think about it!
Ira returned to us all the clothes that her kids outgrew–“perhaps someone else could use them!”–and in good condition, too. She could have sold them, after all, for a little money. Ira is always very grateful when accepting aid. Far from everyone is capable of that, I have experienced that firsthand.
And I want to thank all of those who decided to help.
After the most recent post we asked for a computer for Vika. She dreams of becoming a physician. There are not enough books at school or in libraries. She needs the internet. I was told by many that this is hypocrisy, to ask for a computer when people are starving.
I simply will gloss over that in silence, and thank those who responded positively.
Our Lena Zhukova brought the computer and clothes to Vika. 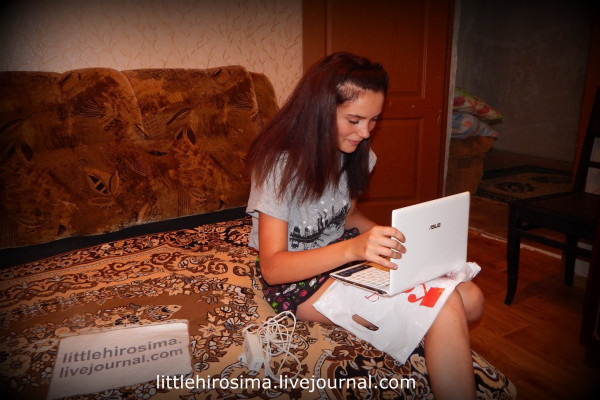 In addition, Leonid donated a tablet with beautiful pink headphones. The girl was smiling from ear to ear.
Thank you, friends!
Enormous thanks to you, Sasha, for organizing the logistics for delivering all of that to Lugansk.
Believe me, you’ve given far more than simply “gadgets” and gifts. 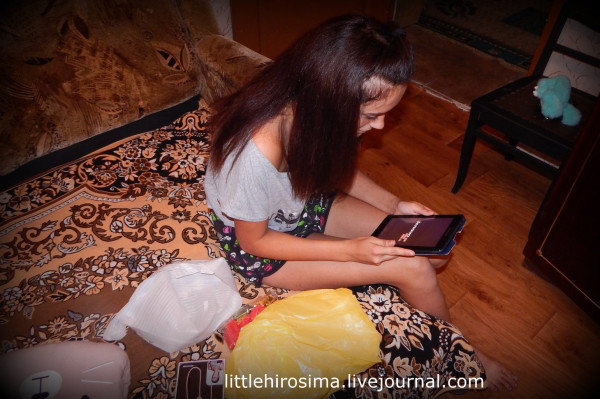 Friends, thank you for your caring! This post contains our report on aid over the last month.
If you want to join in assisting this family, please label your contributions “Ira”. 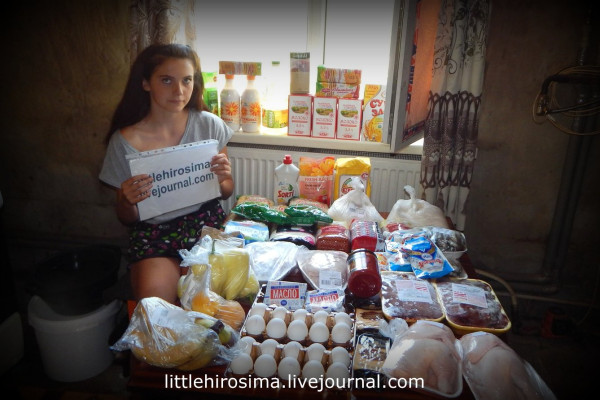