There are many species of dirtbag. One can spend a long time writing that everyone has good and bad aspects, that everyone is a sinner and may err. I know one thing: monsters who rape, who assault children ought to be castrated and put into a cage. I don’t care whether that’s humane or not. I don’t care what others think of it. Once upon a time it was a norm, in my life and my existence, the monsters who should be excluded from society.
Here’s the story. I spent two months thinking about whether to write it. Or, rather, decided it’s not worth it.
But ut turned out that I was asked several times in person about this family, and I realized I must tell the story.
Do you remember Ira from Vergunka and her two children? Who gave birth during the shelling? The husband, father of both children, went off to find work and vanished without a trace. Ira together with daughter Vika and Vovchik are struggling. Vergunka–the locals know–is the edge of Lugansk which was pummeled by all the “arty”. It’s on the line of contact to this day. It had no power for two years since the war started. Water supply is still spotty.
Ira escaped to Lugansk when half of her village was destroyed. Half the houses on her street were destroyed down to foundations. Her house was also badly damaged, everything was looted. Down to forks and napkins. Ira, without a roof over her head, with crumbling walls and without pots or pans began life anew with an infant and a young girl. The father “vanished” and has not reappeared.
To read more about them, click on the “Vergunka” tag. We’ve been helping them for several years. 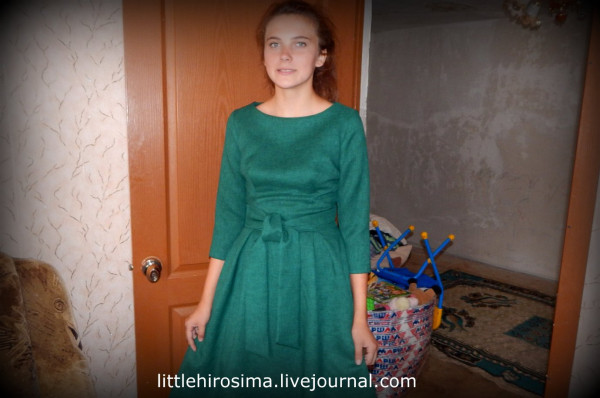 The photo above shows Vika. She’s 15.
I’m quoting Zhenya:
“She’s just turned 15 but she looks 12, her skin, bones and mentality are still child-like…Some dirtbag tried to rape her. He’s 52. She resisted as best she could, she was beaten up so badly that she was all blue. It was a miracle she managed to escape. There’s a criminal case.”
I will not repeat everything Zhenya told me. The attacker escaped…The details are rather unpleasant. One wants to say that the girl was only frightened. No, he didn’t rape her. But she hasn’t left the house since.
Zhenya: “I’m writing, and adrenaline is spraying out of my nose from powerlessness. Iran called us only two weeks later. She “was ashamed”. She. Ashamed. Of what?! She called us and there’s no way to influence the situation. Vika spends her days sitting hidden under a blanket, at night she sleeps with her mom and screams in her sleep while clenching her little fists…She also talks to a psychologist. What does she need all of that for? And that scum is alive. With impunity.” 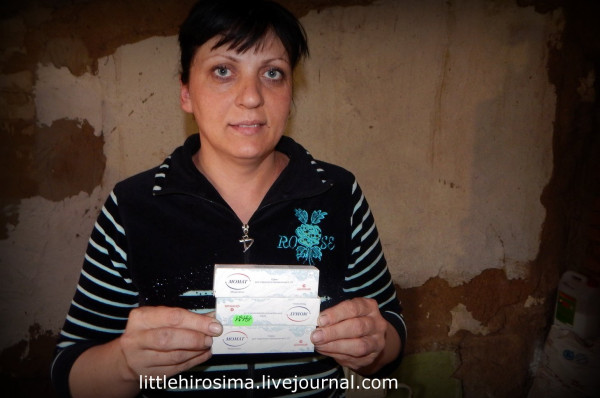 She smiled for the first time only when Lena and Zhenya brought clothes specially donated by my reader Elena. She bought everything her size.
Thank you Elena! Just look at Vika’s eyes, it’s worth a lot.
The first photo shows our girl in one of your dresses. We also have a problem. I already wrote about it. Vika’s computer that was donated by Evgeniya Birman three years ago broke down. She used it to study since she lacks many textbooks and she wants to go to medical school. It proved impossible to fix. There is another option but even there they were not able to make the necessary part. So she’s been without it for a long time. But that would have been half the trouble. Now she spends her whole days at home. It would be a distraction.
Perhaps someone has a spare computer or tablet?
A tablet would be even better, perhaps. I don’t know.
All in all, if you have a desire to help with this, please write me–contact info is at the bottom of the post. 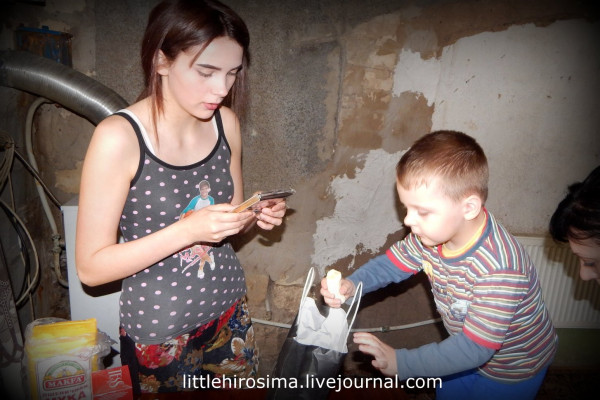 Ira doesn’t know what to do about her daughter.
Vika reacts, talks, doesn’t complain.
But…
And yes, all of that with the war as a backdrop which is practically just outside.
You know, we’ve been helping them for several years. You can read all the posts about them if you click on the “Vergunka” tag. Medications, dishes, doctors, clothing, stove, heaters, repairs to walls and roof, food.
Ira has almost nothing. She works like an ox. 12 hours a day, any job will do, and that’s with two kids, one of whom is still very little. The husband vanished, no relatives, either. And I can’t imagine how she’d cope with all that if it weren’t for you.
Friends, thank you for helping Ira, Vika, and Vova!
Single moms have it hard even without war, and here…

Please label your contributions “Ira”.
Thank you for your caring and concern!

The photos show our most recent aid reports. 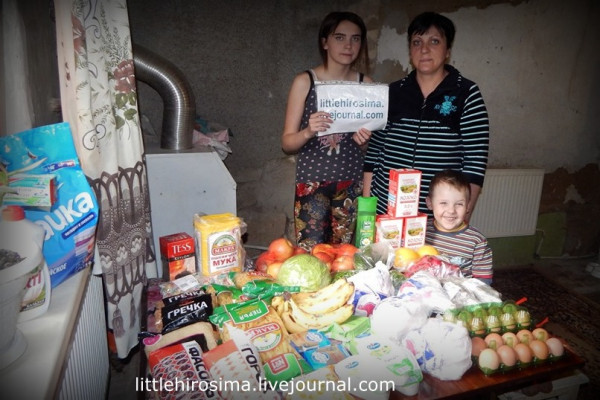