Many got weary of my posts.
Fed up with reading them.
How much can one take?
I myself got tired of writing them.
But it’s not simply “how much can one take?” but “how much is needed”–a lot is needed, a lot.
The war’s in its sixth year.
Those who were infants when the first bombardments began will soon go to school. In the border areas, kids no longer even react to shelling but continue to play in the trenches.
And…information continues to flow.
For yet another time, I want to say that reposts work. Even simple likes work.
Very, very much.
And thanks to all those who, in spite of fatigue, don’t stop liking and reposting.
On more than one occasion, relatives were able to locate their family members from my posts.
And today I want to tell you one of these stories.

Do you remember Irina Grigoryevna? She came from Russia before the war (she lived in Petropavlovsk-Kamchatskiy) to visit daughter and grandson in Lugansk. Then the war started. Son in law died in a bombardment in August 2014 in Lugansk. The wife howled when she recognized the corpse. It is then that she withdrew into herself. They say “she lost her mind” and has been in a clinic ever since.
The grandmother was left alone with the grandson. She lost her documents during the shelling. Or maybe they were stolen–nobody knows.
She couldn’t return to Russia without documents, or obtain new documents.
So she couldn’t draw retirement or benefits.

How did she live?
This is how. Here the neighbors will help, there she’ll wash floors, elsewhere she’ll dig up the garden.
In February ’18 she survived a stroke. Things were not going well, to put it mildly. Surviving on her own with the grandson Danila was very difficult.
The boy was recently admitted to a cadet academy. It provides full support–food, uniforms, textbooks. He spent his day off with the grandma. That was enormous relief.
But then, just imagine, my posts about Irina Grigoryevna were by chance read by a distant relative in Russia!!! Who then managed to make contact with her.
They cried without respite.
As soon as she has a passport issued the relative will take her in.
There is a preliminary agreement to transfer Danila to St. Petersburg.
That’s where things stand.
We’ll continue to help them until their departure.
How did they hold out all these years?
A miracle, probably.
Thank you, friends, for your help, which allows us to not only help these families hold out in a difficult time, but also write about it.
Thus, by accident, lost relatives are rediscovered.
Thank you!!! 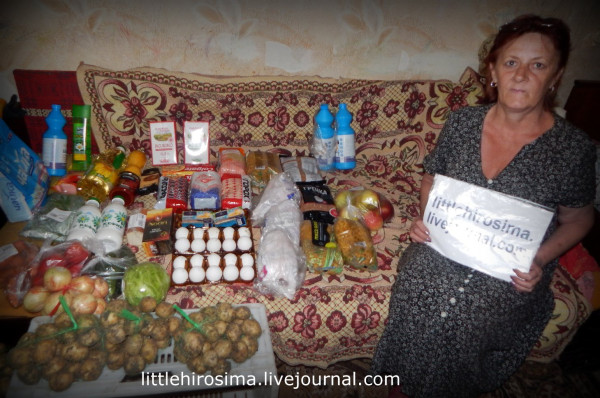