Since we’re on a streak of good news, I will, with your permission, extend it.
We have us a Taisiya Pavlovna.
Our “grandma”, raising a grandson on her own. The daughter was struck down right in front of her son during the summer of ’14. A shell fragment cut through her stomach, intestines, liver. The Lugansk hospital performed an emergency surgery as best they could, without electricity, in extreme heat. Such were the times. The summer of 2014 was very bloody for Lugansk. The city was besieged, and was being destroyed using all types of weapons, including aircraft. There was no phone service, water, electricity, food, pharmacies were empty. People couldn’t understand what was happening.
Sasha’s mom lived for two more years after that wound. Two years of suffering and constant pain, before expiring.
Sasha was left alone with his grandma. No, that’s not right. They had each other.
We’ve been helping them for years. Last year Taisiya survived two strokes. Thank goodness she survived and recovered.
Taisiya Pavlovna has a whole range of ailments, including hypertension and diabetes. She and Sasha live on 3200 rubles a month, plus our aid. I can’t imagine how one can live on such income. The boy is growing, goes to school, there are utilities, medications…
This information is for those who doesn’t know anything about Taisiya Pavlovna.
And now I will say more. There is an amazing person among us. Boris from Kazan. Remember him? You should!
Yes, he’s the one who bought the boiler for our sisters, and brought cigars from Cuba for Seryozha Kutsenko. He’s also helped a lot others as well. Boris is a young geophysicist, with merry young sons. Boris, I didn’t say too much, did I? 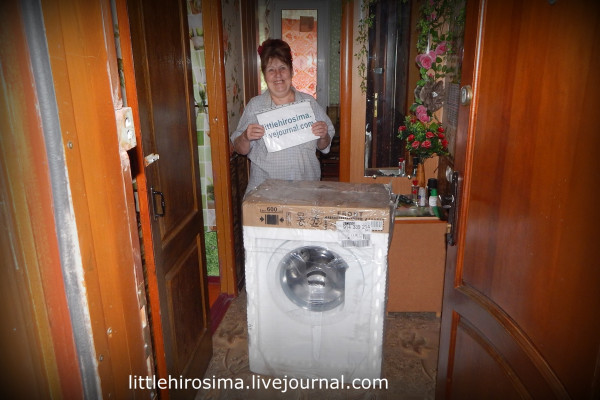 He’s once written me about some positive post about aid, that we need to “make more positive posts”. And one must say that Boris has played a big role in increasing the number of such stories.
So we and Boris decided to buy a washing machine for our grandma.
It’s difficult for her, after the stroke, and we are very worried about her.
Now a word from Zhenya, who actually purchased and delivered it to Taisiya Pavlovna. We didn’t warn her, it was a surprise:
“We were concerned about Taisiya Pavlovna. When she saw the washing machine, she was dumbstruck, her lips began to quiver. “Why, why…oh, mommy, mommy…”. Then couldn’t say anything else. We were barely able to return her to normal. To be honest, I was worried by the way she went all pale…I regretted we didn’t let her know ahead of time, so big was the shock.”
But just look at her face.
That’s how it is.
Taisiya Pavlovna cried. Honestly, earnestly, from her pure heart.
We all did with her.
We have been involved with humanitarian aid for five years, but how can one get used to this?
All in all, more positive!))))
In hoc signo vinces!!!!

Please label any contributions intended specifically for this family “Taisiya”.