Dear Lord, I don’t know what to say.
My hands are dropping.
We visited Larisa, the mother, and Marina in Lugansk in the spring of 2017. Very pleasant, bright people with a hard fate. Marina was 13 then. I remember her modest but hard gaze: “I’m not afraid of anything, my father died in my arms.” Cancer…They know what war is. They had “incoming” during the entire summer and fall, when the father was dying…
Their life was difficult, we brought them a lot of food and clothing. The girls’ sight began to deteriorate, we helped buy glasses and carry out tests. They gave us tea and didn’t want to see us leave.
Larisa is a very attractive woman, modest and soft, she really wanted to repay us somehow.
And then…
We haven’t spoken to each other in a long time. It turns out they lost our phone. Lena happened to be driving by so dropped in to see how things were going…
And…she couldn’t recognize Larisa. The woman burned out in three months! Simply burned out.
Look at the photos. There’s nothing to be done.
Three months in hospitals. Stomach ulcer.
Larisa’s elderly mom looks after her. Marina was taken to a rehab center. It all happened so fast that nobody could figure out what was happening. And it’s not cancer, but an ulcer. Had we only known!
The first photo was made on Friday, when Lena visited. Larisa remembered her, they chatted a little, even though it was not easy for her. 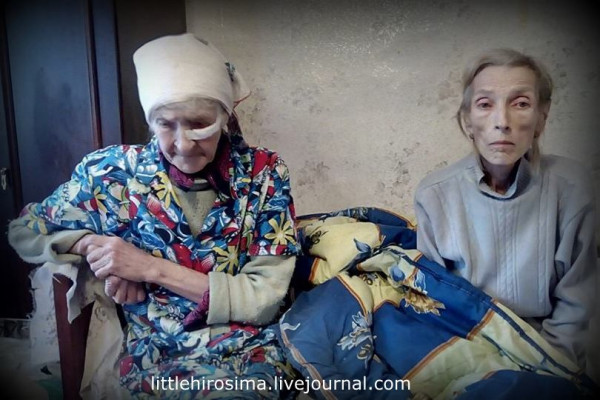 When Lena brought diapers two days later, Larisa was unconscious. She did not regain it. Perhaps she only has days left. If you are a believer, please pray for her…
There is another nuance. It turns out that Marina is an adoptive daughter. Larisa never told us that. My daughter, that’s all there’s to it.
I can’t imagine what’s happening with Marina.
First her father died in her arms. Died during the shelling, while the shells were still flying. Their area was under constant fire. All that time, the girl and mother sat with the adoptive father. And now the mom…
Marina returned to the rehab center from which Larisa took her some time ago.
Dear Lord, what horror.
Damned war. Don’t say it has nothing to do with it.
I hate it, I hate it, I hate it!!!!
What is happening?!
When will it end???!!! 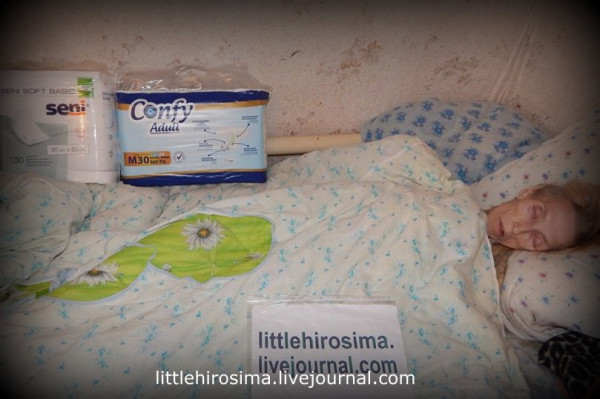