When we were in Lugansk, I really wanted to visit our lovely Ira. Listen to her guitar and singing and have tea with her. She’s a person of rare kindness, and one always wants to be around her. She has cancer and, to be honest, when we thought of bringing her to Moscow, the doctors said she was in a bad shape. But Ira never lost hope. She smiled unforcedly, genuinely, sincerely. Such smiles are becoming ever more rare.
Back during the winter she was in bed, never got out, and she was given no chances of survival when she and her husband started treatment. We were not told what kind of treatment. The husband, who is an emergency care medic, helped her a lot.
And then she started to get better. In a big way. We and Zhenya even agreed not to write about it, only mention it obliquely. We were afraid to even speak about it.
After all, she didn’t simply start to get up. She blossomed, improved in every way.

For a long time she lived at her mother’s, it was the first floor after all and she couldn’t walk. Her mom took care of Irina who simply lay in bed. But in the spring she returned home, to her husband and children. Not only to live but to run the household. Cook, clean, go outside.
But…
Right now Ira is again at the cancer ward. It started with elevated temperature which seemingly came out of nowhere. This began back in August. We happened to be in Lugansk and decided to visit. But I still had an ear ache so we didn’t risk it, fearing a virus.
Her cancer metastasized into the lungs.
Which, as you know, is a serious condition.
Inna, Tanya, Sergey Balanov, Natasha, Sofiya…
And, you know, in a way you do realize that when you start to help someone with cancer it’s probably a hopeless case.
But how can you not help?
We became attached to Ira. There is something so genuine, real, about her.
I don’t know what the volunteers at hospices and cancer doctors go through when they see hundreds of deaths like that…
No matter how hard you try to pretend you got used to it, it doesn’t quite come out. Although, to my own horror I sensed my pain was dulled. It became distant and muted.
One also wants to tell everyone who thinks that they have problems, be happy with every second of your life. Like Ira does, for whom every moment with her kids is a source of joy.

Ira needs leicostin, which we plan to buy in the near future. She will get these shots after chemo which she will undergo shortly. If you want to help Ira and her family, please label any donations “Ira”. 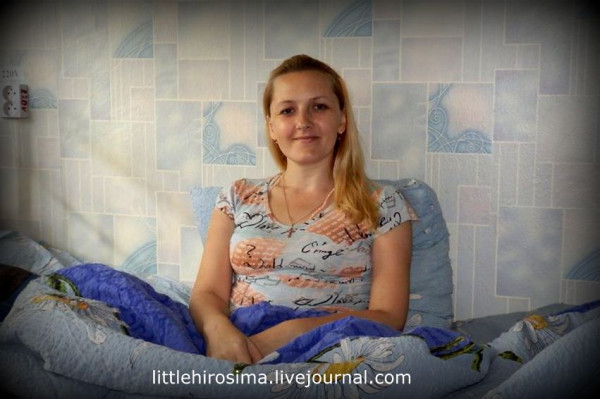