Gurzuf was painted by Korovin, Shishkin, and Ayvazovskiy.
It’s artists’ Mecca. Even today the old town is full of artists, painting the city, mountains, and the sea. Cypress trees, fig trees, red roofs at one’s feet, balconies, cobblestoned narrow alleys.
They say that Gurzuf renovation plans include its waterfront and parts of the old Gurzuf. I haven’t seen the plan, only heard of it from those who’ve seen it. They want to take down part of the old Gurzuf, along the Chekhov Street. And want to remodel the waterfront.
My grandfather, Lev Knipper and his whole family including his aunt Olga Leonardovna Knipper-Chekhova and the writer’s daughter Maria Pavlovna Chekhova, have lived in this part of the town almost without a break. Many famous people lived and live there still. The place exudes history. These are most beautiful places, old and full of character. 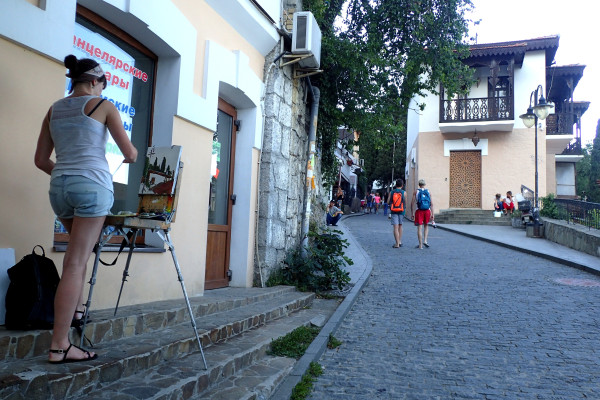 Gurzuf is older than Moscow and it’s unique.
There are many things there which may appear old, but that’s what makes its special and sets it apart. And, it seems, the plan is to make everything “rich,” beautiful, and gleaming.
Judging by the rumors, it will be beautiful kitsch.
There are activists in Gurzuf who are trying to make it clear to the authorities these are historic places. Centuries-old. These streets have been celebrated by hundreds of artists and poets. Paintings of Gurzuf are in leading museums of the country.
One should beautify it with care.
And this should not be done by officials and effective managers, but people with taste and understanding of Gurzuf. So here I see another problem which the local authorities often don’t see. In the 25 years Gurzuf was on/in Ukraine, it was continuously defaced. Yes, they did make the waterfront (or rather laid down marble and railings, because the waterfront was built during USSR), but then stuffed it full of cheap, ugly pubs. Some of them were taken down this year so now at least one can see the sea. Yes, they did make some of the streets. And did a decent job. Laid down tile on the main street, and some places were even improved.
But, overall, the last couple of decades were a downward spiral. People were chopping down their gardens and putting up plastic awnings for the tourists. The profiteering was shocking.
It wasn’t true for all of Gurzuf, but the process was observable over my whole life.
Our neighbor covered his plot with asphalt and cut down the cypress–and old, large, and healthy tree. A cypress! Now he has a “stylish” concrete bungalow with an umbrella and garage, regularly occupied by tourists. Many of the locals likewise built up their plots and gardens and cut down their trees. During my childhood, along the entire way to the sea, I could pluck figs and cherry plums every 10 meters.
Another one of our neighbors who looked after our plot, when our mom left him money so that he would keep our garden in order, cut down a hundred-year-old vineyard!!! It grew for over a century, became tree-like, and covered half of the plot!!! He cut down large bushes of white and red roses, a plot with daffodils and irises. He covered it all with asphalt and even offered mom to build bungalows with garages and rent them. I was little, but will never forget how when we came from Moscow and opened the gate, after which mom did not get out of bed for 2 days and did not speak to anyone. The neighbor still doesn’t understand what he did wrong. In his system of values, he did good, and we were stupid and didn’t understand anything. The place was going to seed, after all. 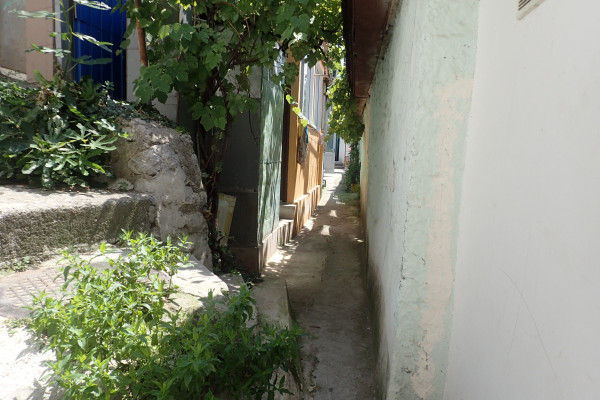 Crimea is getting a lot of money.
But, unfortunately, the officials often have very cheap tastes, and one can hope that if they do make improvements, they’ll preserve all that’s unusual that’s here.
They’ll preserve the centuries-old quarters. I really want the rumors that are spreading are only imagination. I want people who understand what Crimea is will be in charge of the improvements.
Some of the locals are against the improvements. But they are necessary, though they have to take the local context into account. 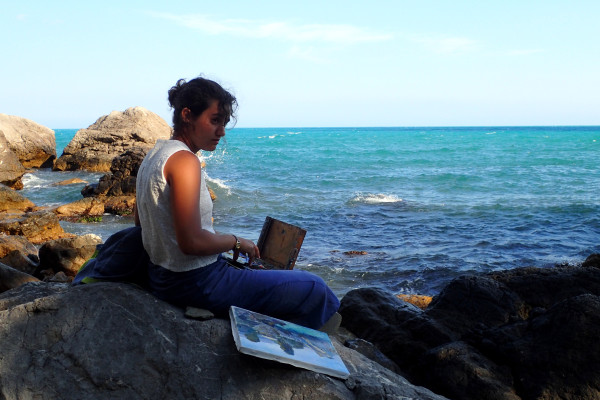 But there was a situation in which a lack of taste was a problem.
The director of the Artek children’s camp which is next to Gurzuf, Aleksey Kosprzhak, already “distinguished” himself by closing off Artek with a veritable Great Wall of China, which is how the locals dubbed it.
The idea in itself is sound.
But now along the several kilometers of the camp one cannot see the sea from ANYWHERE. Artek is a closed camp and the kids ought to be safe. But across the street there live people, and the locals have always walked to the sea alongside the camp fence. I myself ran a million times to the Bear Mountain along that fence. There were drooping trees and magnificent views of the sea from nearly every vantage point. But now there are no trees and no sea. Only this big thick wall. Why? Couldn’t one build a wall that didn’t spoil the view?

This three-meter wall now runs along the whole camp. 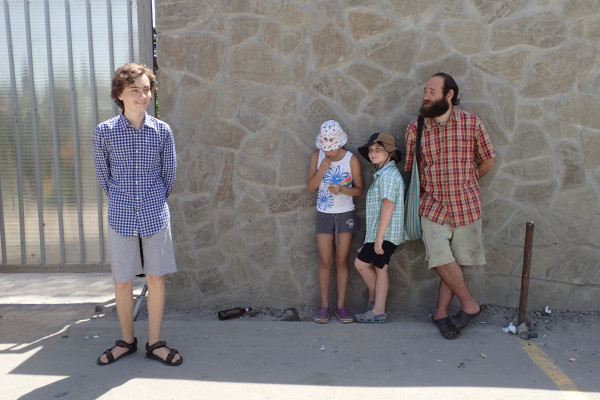 I will disappoint Ukrainian patriots who are now rubbing their hands. The killing of Gurzuf began in the ’90s. In the ’00s they built ugly multi-story buildings on every slope. Then many were abandoned unfinished because there was no money. And they stand there, horrifying, with gaping holes, even with rusting cranes, in the mountains and on the shore.
I realize I’m a nobody and the authorities won’t hear me.
But I think it’s important that those who will “beautify” Gurzuf will keep its history in mind.
This place belongs to Chekhov, Korovin, and Shalyapin.
And, naturally, Gurzuf belongs to the people. Not the people to Gurzuf. 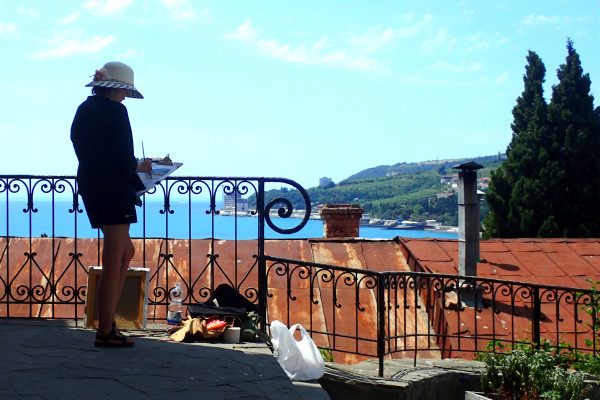