Zhenya and I were helping pick up a woman with cancer from the hospital. While on the road we started to talk. She is from Stakhanov, her son is a combat engineer in LPR. We drove and talked.

I doubt I am saying anything new, but you know, when here, in Moscow, you meet someone from over there, from the Donbass, it immediately jumps out.
Right now her son is manning the front line on the Donets River, right on the line of demarcation.
–You know what the naziks are doing? They use artillery shells to stun the fish, and then the locals all gather to pick up the pike. You know how big they are?
And he shows, with his hands, just how big these fish are.
–Then they start shooting. At the people.
–Whatever for?
–What do you mean? To sow panic. There’s hardly anyone left in the village anyway. Bread is delivered once every three days. There are three cripples there. But it bothers them.
–Seems odd.
–Why odd? The militia can’t even shoot once. Because as soon as they do, OSCE will come and say they are violating the agreement.
–But they can?
–They are always firing. Trying to provoke our guys into violating the ceasefire. That’s all the OSCE is waiting for.
I have a friend who serves in the militia. We studied together at the university. We haven’t seen each other for many years, and then met in Lugansk.
He said that “we get locked up if we respond.”
But the Ukrainian military is constantly shooting, without a worry in the world. All the time.
Everyone is saying it–I’ve heard a dozen of such stories from all the border areas.
You wouldn’t believe how fed up I am with all this idiotic talk of Russia being an aggressor. 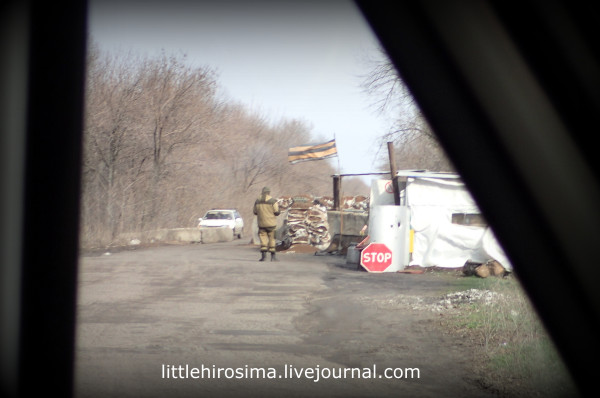